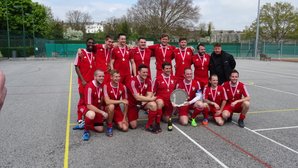 Saxons too much for Southwick in this all Sussex clash

Southwick took the lead after a promising start with a goal from Robert Lowe from a penalty corner after 15 mins.
Saxons levelled from an open play break on 22mins.
Another break meant that Saxons went 1:2 up after 26 mins, and the followed up with a Penalty Corner strike on 29mins to reach the interval at 1:3.
Southwick had the lions share of the attacks but failed to convert from their 3 penalty corners and the 4 opportunities in front of goal.
The second period was in a similar vein Southwick having 4 penalty corners to the 1 of Saxons, but an open play goal after 61mins was enough for Saxons to run out with a 1:4 victory.
Share via
FacebookTwitter
https://www.pitchero.com/clubs
Recent news