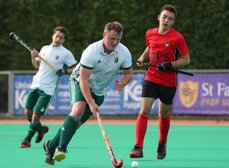 Wickers topple the leaders with a second consecutive win

Matt Vokes
Antony McAlister 2
Rob Lowe (pen)
Wickers got a were well worth their win against leaders Canterbury and seriously dented their promotion hopes.
Canterbury found it hard to make headway against a very organised Wickers.
Goals from and Antony McAlister came from penalty corners, but wickers were a constant threat on the break.
Matt Vokes scored a deft finish over the goalkeeper to sort out a goal mouth scramble.
A blatant deliberate back stick foul with Matt Rickson about to shoot resulted in a Penalty, this was put away by Rob Lowe in style.
Canterbury got a late penalty, but this served to flatter they had been well beaten.
Young Jon Westley was man of the match.
Wickers continue their climb away from the bottom of the table.
Next Week BBHC away in Kent.
Share via
FacebookTwitter
https://www.pitchero.com/clubs
Recent news