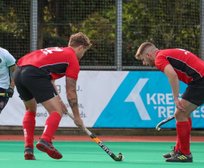 In atrocious conditions this was a hard-fought game with many errors.
Antony McAlister came close from penalty corners, but wickers were not getting the break they needed.
Crawley finished from close range after a frantic number of attempts by the Wickers defence to clear from the ‘D’.
Wickers had half chances and won a few penalty corners but were unable to convert.
With 10 Mins to go…
A fine bit of wing back work by Ciaran Fitzgerald on the right wing was followed by an excellent early pass which was put away by Rob Lowe in style with a deft touch. The ball flew into the top left corner of the goal with the keeper just an observer. This was by far the clear high spot in the game for the spectators.
The last 10 mins was a frantic chase for the elusive winner by both sides, but the game became more scrappy as the weather worsened.
Wickers continue their climb away from the bottom of the table.
Next Week fellow strugglers Gillingham Anchorians away in Kent.
Share via
FacebookTwitter
https://www.pitchero.com/clubs
Recent news