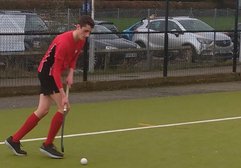 Ollie Wellby 3
Paul Glover
Wickers slipped up to bottom side Middleton. This was a roller coaster of a game with 2 early goals by Middleton setting the pace. Ollie Wellby got a fine goal back with a flick into the top corner, giving the goalkeeper no chance. Middleton extended their lead to 3-1 and shortly after Wellby got his second with a touch in at the far post. 3-2 at half time.
Wickers new that it was essential that they need to score first after half time the did from a penalty corner with Paul Glover touching a Chris Harris pass past the keeper.
Wickers pressed to get the winning goal only to concede another again going behind 4-3.
The urgency showed as wickers missed three good opportunities to score and the pressing left the defense sparse and Middleton put the game safe with less than 10 mins to go.
Pressure resulted in a fine move involving John Jamieson, George Brigden and finally Ollie Wellby, and he dummied the keeper and slotted home for his hat trick.
Wickers failed to find the elusive equalizer.
Share via
FacebookTwitter
https://www.pitchero.com/clubs
Recent news