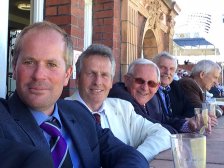 We have a loyal following of Vice Presidents who support the club and enjoy a number of social events. We also get together for days out to County matches, typically at Lords, Ageas Bowl, Arundel and perhaps Taunton. We organise a number of lunches at South Wilts CC every season. Dates for the 2023 season will be announced in due course.

Our clubhouse balcony makes an idea vantage point to enjoy the cricket and the facilities at the club house are ideal for a perfect summer day out. As well as match days, we always support the annual cricket dinner and awards evening, and generally support all the many social functions held at the Sports Club all the year round.

All are welcome to become a VP, if you are interested please contact the President Trevor Hayward trevor.h.hayward@gmail.com or ring him on 0750 6686311 and he will provide more details.