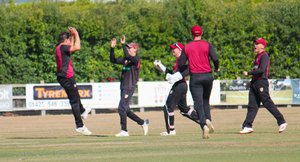 1s Lead At The Top Narrowed

Back-to-back defeats by Bournemouth and Bashley (Rydal) have trimmed South Wilts’ lead at the top of the ECB Southern Premier League to a mere two points.
That’s put massive significance on Saturday’s ‘white ball’ showdown with the Hampshire Academy at Bemerton (1230), the county youngsters lying dangerous close in third place, just ten points behind.
They tied with St Cross Symondians 244 runs each last weekend; had they won, it would have been even closer at the top.
South Wilts go into the Academy match with 240 points in the bag from 13 matches, compared with St Cross Symondians’ 238 and the Young Hawks’ 230. Havant are fourth with 214 points.
Remaining matches for the top four are –
South Wilts: Academy (h), Totton & Eling (h), Havant (a) and Burridge (h).
St Cross Symondians: Lymington (h), Hook & Newnham Basics (a), Bournemouth (h), Bashley (Rydal)(a).
Academy: South Wilts (a), Lymington (h), Totton & Eling (a), Hook & Newnham Basics (a).
Havant: Bournemouth (h), Bashley (Rydal)(a), South Wilts (h), Totton & Eling (h).
South Wilts arguably found themselves 40 runs short of a defendable total, despite posting 272-5 against Bashley (Rydal), who chased the target down in the to win by four wickets with 27 balls to spare.
Michael Porter was the Bashley hero, hitting an unbeaten 115, an innings he declared was “probably my best in the Southern Premier League.”
But Porter shared the praise around: “Our bowlers did seriously well in restricting the runs. I thought South Wilts were probably 40 runs short, so fast was the BCG outfield.”
​Left-hander Jack Stearman underpinned the South Wilts innings with 97 – he went on to make 122 in the T20 win over OTs & Romsey the following day – and featured in two hefty stands.
He put on 94 with Tom Morton (40) and then 104 with Peter Rowe (60) before holing out at 204-2.
South Wilts lost three cheap wickets after that before Jack Mynott hit a quick-fire 30 to get them up to 272-5 off 50 overs.
A double strike by Matt Burton (2-39) put Bashley on the back foot, with Ben Francis and Jacob Gordon dismissed.
Will Tripcony (22) steadied things before Saif Achakzai kick started the run chase with 41, including eight fours.
But it was Porter’s innings that proved the match winner. He brought up his 50 in a lively stand with the Afghan before Josh Digby (22) and Patrick Lewis gave support.
James Trodd arrived at the crease with Bashley 196-6 with work still to do, but 16 overs in which to polish off the target. They did it with time to spare, Porter bringing up his century long before Trodd (38 not out) whacked Aaryan Sen to the boundary off three successive deliveries to complete the task.