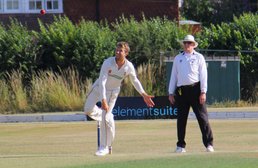 By Rob Pittman
6 days ago
Share via
FacebookTwitter
https://www.pitchero.com/clubs

​South Wilts are bracing themselves for a roller coaster finale to the ECB Southern Premier League season.
With five rounds of ‘white ball’ matches to go, they already have the Time pennant in the trophy cabinet for a tenth time in 22 years.
But they’ll embark on the second phase of their 50-over games with a slender nine-point over St Cross Symondians and with the Hampshire Academy a threatening third.
The Hampshire teens play St Cross Symondians (Nursery Ground, Saturday) and South Wilts at Bemerton on August 13. If they were to win them, the title race really will go down to the wire.
South Wilts, minus left-hand opener Jack Stearman (concussion) and Arthur Godsal (back), sank to a two-defeat defeat by Bournemouth, who completed to double over Ben Draper’s side at Wilton Road.
They chased down South Wilts’ modest 210 with a half-century by Jake Hurley key to a victory that has eased Bournemouth 14 points clear of Hook & Newnham Basics, who now occupy bottom place.
Oli Breckon (3-32) marked his Lions return with a critical new-ball spell, which accounted for Jack Mynott, Tom Morton (24) and Peter Rowe, the young seamer taking advantage of a green tinged surface.
With Simon Woodruff (3-36) removing Ben Draper for a duck, South Wilts were rocking at 59-4 and, after lunch, 131-7 with the left-arm seamer taking two more wickets, including teenager Matt Falconer (21) caught at slip.
Indian spin all-rounder Aaryan Sen (46) and Tom Grant were beginning the repair the damage when a superb piece of fielding by Tom Willoughby ran out the Mumbai youngster.
Grant remained to hit 51 and added a vital 40 for the last wicket with Matt Burton to set Bournemouth an intriguing 56-over run chase.
Tasmanian Tom Willoughby (38) underpinned a confident Bournemouth response, enjoying a 51-run start with Luke Webb (29) before both Woodruff (22) and Lewis Freak (28) produced cameo knocks.
Mynott made inroads with a spell of 5-47 which kept South Wilts in the hunt and when Rob Pack went at 167-6, the outcome was in the balance.
Just as he had done against Bashley (Rydal) the previous week, Hurley stepped up to the plate and won the match, sharing a key seventh-wicket stand of 36 with Chris Park (which took Bournemouth to 203) before completing his half-century, which included sixes off Sen and Burton.
Mynott nabbed a fourth and fifth wicket, including that of Hurley, but by then Bournemouth were almost home and dry.