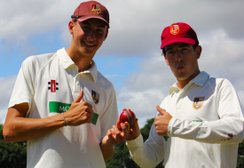 Tom Lewis and Josh Croom shared all ten wickets as South Wilts bowled Burridge out for 163 before completing a seven-wicket victory to secure their position as ECB Southern Premier League leaders.
Lewis took 5-26 after pacey left-armer Josh Croom had softened up the Burridge top order, finishing with 5-48 after removing the hosts top three. Peter Rowe hit an unbeaten 77 to complete the formalities.
The win puts South Wilts 15 points clear of second placed St Cross Symondians ahead of Saturday’s top of the table showdown at the Green Jackets Ground.
If South Wilts can win on the outskirts of Winchester, they will create clear water between themselves and the other clubs, but if St Cross were to repeat their five-wicket win at Bemerton on the opening day of the season, the situation at the summit will become pretty tight.

Burridge, in contrast, are in serious danger of being dragged into the relegation zone. They are effectively only four points ahead of Hook & Newnham Basics and ten of Bournemouth, who go head-to-head in round ten this weekend.
Croom, who now has 33 SPL wickets this season, whipped out Burridge’s top three after Azim Chowdhury (21) had struck five fours in a typically breezy opening.
Minus their injured skipper Hilio de Abreu (bicep), Burridge were soon 54-3, leaving talented Cape Town teenager Nathan Schoultz (50) to pick up the tab and hold the innings together.
At 115-4 the South African teen became a second victim for Lewis, who went on to create significant inroads and personal best SPL figures. Pity about his (now outlawed) yellow boots : Tom will be popping into Cricket-Hockey’s store at Downton shortly !

Dan Stancliffe (21) and Will Donald (17) took Burridge to 148-5 by lunch, but Croom’s return for a second spell and Lewis going on to complete a ‘five-fer’ sent the last five wickets tumbling for 15 runs and Burridge to 163 all out.
Left-hander Jack Stearman had made scores of 107 and 75 in two of his three previous knocks, but was brought back to earth with a thud with a first baller.
When Sully White (2-40) picked up a return catch to remove Tom Morton, South Wilts wobbled at 27-2, but the run chase was in good hands.
Peter Rowe is in excellent form and went on to win the match with an unbeaten 77, sharing a handy 50-run third-wicket stand with Arthur Godsal (16) before linking up with 16-year old talent Matt Falconer.
Their unbroken 90-run stand swept South Wilts to victory, Rowe hitting 12 boundaries in his 77 and Falconer scoring an unbeaten 41.