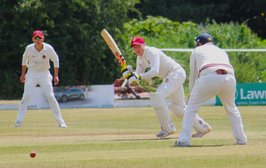 Its little wonder South Wilts are riding high at the top of the ECB Southern Premier League – their batsmen can’t stop scoring hundreds !
The unbeaten 105 skipper Ben Draper made to lay the foundations for a comprehensive win over Havant was the fifth century a Bemerton batter had made in the side’s four Time pennant victories.
Tom Morton set the ball rolling with back-to-back hundreds, firstly 110 against Bashley (Rydal) and then that powerful 130 in the ruthless nine-wicket demolition of the Hampshire Academy on June 11.
Jack Stearman partnered him that sun filled Ageas Bowl evening with 107 not out. A week later, Peter Rowe lit up Totton & Eling’s Southern Gardens with 166 runs of the highest quality.
Draper’s 105 not out was the South Wilts’ captain’s third in the Premier League – he made previous tons against St Cross Symondians in 2017 and at Bournemouth two years later – and underpinned a rain trimmed total of 234-5 which was always beyond Havant’s reach.
The 109-run win was South Wilts’ fourth in the all-day ‘time’ format and maintains a five-point lead over the Hampshire Academy (who beat Totton & Eling by five wickets) and 13 over St Cross Symondians. Approaching the halfway point, they appear the only two realistic challengers to their championship crown.
South Wilts’ visit to Winchester’s Green Jackets ground on Saturday week, July 9 is clearly one to ring fence in terms of where the trophies are handed out at the end of the season.
Draper said that “South Wilts had got all three disciplines right against Havant – strong batting, good bowling and fine fielding.” His assessment was spot on.
South Wilts were firmly in the driving seat when they sat down for lunch a healthy 111-2 – Morton’s breezy 24 kick starting the innings before the unflappable Jack Stearman set his course for another key knock at the top of the order.
Peter Rowe came and went cheaply, leaving Stearman and Draper to add 63 before the break.
Havant’s Ben Walker must have felt he was skippering with one hand tied behind his back.
With Richard Jerry (side muscle) and Sony Reynolds (back) injured and university captain Nick Ward returned home to Folkestone, Walker was Havant’s sole seamer, though his nine overs cost only 16 runs. The remaining 51 overs were spin.
Stearman, only two shy of 400 Premier League runs this season, was happy enough and, having hit a six and eight fours in his 75, looked all set to score his second century of the season when he missed a straight one from 14-years old Matt Hayward.
Stearman’s departure at 169-3 allowed Draper centre stage – and he certainly didn’t disappoint the bumper turn out of vice-presidents who broke off from their smoked salmon lunch to stand and applause his century which contained a six and 13 fours, many from his favoured sweep shot off the spinners.
Draper is enjoying a golden summer, closing in on 1,000 runs in all cricket, with four fifty-plus scores for Wiltshire in addition to his run glut for South Wilts.
“He went from third to sixth gear in very quick time against Havant. His innings was a joy to watch,” praised team-mate at Wiltshire boss Tom Morton.
In days gone by, Havant might have engaged in a run chase but, a club in transition, they are a pale shadow of the side that nailed eight separate championships between 2000 and 2017.
Young Charlie Whitfield (19) led a sound enough start but from 38-0 Havant lost seven wickets for 28 runs and plunged to 66-7 – Chris Stone watching on in horror and disbelief as a succession of partners came and went and the visitors’ changing room door almost came off its hinges.
Aayran Sen (3-35), the Mumbai spin magician, opened the can, removing Harry Gadd courtesy of a superb catch in the deep by Stearman before birthday boy Tom Lewis (3-38), bowling in a hideous pair of yellow boots (£5 from a charity shop ?) sliced through the top order.
Attack was Stone’s only form of defence and he continued his excellent recent form – an unbeaten 97 against Hook & Newnham Basics and 123 at Bournemouth – with a boundary strewn 50, two sixes, eight fours, so 44 of them crossing the rope.
Five of Havant’s batsmen managed only single-figure scores – two colts bagged ducks – before Matt Burton (2-23) and Josh Croom wrapped things up. Havant 125 all out, beaten by 109 runs.