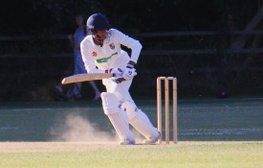 Indian spin all-rounder Aaryon Sen has waited patiently to underline his batting prowess since arriving at South Wilts from the sub-continent in May – but when his chance came against St Cross Symondians he grabbed it with both hands and emerged his team’s saviour.
With all their main batsmen back in the Green Jackets pavilion, South Wilts were creaking at 142-6 and facing potential defeat in their top of the table ECB Southern Premier Division duel.
But the 20-years old, who opens the batting for his club in Mumbai, took charge of the situation, particularly in the closing half-hour.
Australian seamer Sam Beer celebrated a fourth successive five-wicket haul – an individual record in the SPL – but was unable to apply the finishing touch as Sen and Matt Burton, the visitors last pair, batted out the final eight overs for a draw to deny St Cross Symondians’ victory.
They foiled their Winchester hosts by hanging on at 186-9 after St Cross had twice staged recoveries to post their 242-9.
South Wilts were content enough to emerge with a ‘losing draw’ as they enjoy a nine-point lead jointly over St Cross Symondians and the Hampshire Academy, each with 177 points.
Matches between the SPL’s two juggernauts normally produce an absorbing watch and this one was no exception, with the balance swinging back and forth, none more so in the St Cross innings.
In some strife shortly after drinks at 53-5, St Cross recovered either side of lunch, with Felix Organ (67) and Jack Bransgrove (51) sharing a century stand which ended with the Hampshire batsman mis-hitting a half-tracker from Sen down deep mid-wicket’s throat.
A far healthier 159-5 soon became 183-9 with the pacey Josh Croom (3-56) and left-arm spinner Sen (3-56) sharing six of the wickets. Bransgrove’s fifty was carefully constructed and good value.
But St Cross bat deep – as South Wilts almost found to their cost in the corresponding game of 2021 – and last pair Beer (31 not out) and Matt Haworth (24 not out) produced a telling and unbroken 59-run partnership to swell the home total to a competitive 242-9.
Jaded after approaching five hours in the heat, South Wilts saw three of their top four batsmen blasted out by Beer’s blistering new-ball start.
The Victorian trapped Jack Stearman leg before with his second ball and, with the initial two deliveries of his second over from the church end of the ground, had fellow Australian Pete Rowe well caught by Charlie Gwynn and Ben Draper lbw.
South Wilts were 9-3 after only 14 deliveries, but were able to regroup over tea and plan for a marathon 50-over evening session.
Tom Morton was the prize scalp St Cross didn’t get and, with Arthur Godsal in support, put South Wilts back in the reckoning during a century fourth-wicket stand.
The pair took the South Wilts reply to 107, Morton (72), having notched 12 fours, getting the team in a position where chasing a target of 135 at around a run a ball was a distinct possibility, provided they kept their wickets in hand.
But at the tail end of the 31st over the Foyle brothers, Harry bowling and Tom behind the stumps, engineered a caught behind verdict against Morton, who stomped off, clearly unhappy.
It was a real body blow for South Wilts’s outside chances of winning and when Godsal (44) fell at 142-6 the odds swung in favour of St Cross.
Beer completed his ‘five-for’ as the 2018 SPL champions took three more wickets to leave South Wilts 150-9 and St Cross one more wicket away from victory.
Now Sen had the chance to show off his batting skills. He and Matt Burton took centre stage knowing that dismissal was not an option.
Sen didn’t disappoint either, seldom looking in any trouble as he made a steady 42 not out, at the same time, sheltering Burton, who frequently had five or more St Cross fielders in close catching proximity as the pair ate away those eight crucial final overs to leave South Wilts 186-9 and safe from defeat.