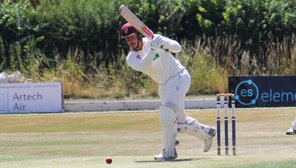 Tom Morton carved an indelible entry in the ECB Southern Premier League record books by making the highest individual score in the league’s 23-year history.
His truly superb 196 against Lymington in the Bemerton heat beat the previous highest score of 184 not out by Liphook & Ripsley’s South African batsman Dom Ridley, who had held the previous ‘top spot’ since 2005.
Having hit three sixes and 26 fours in his 187-ball stay at the crease, Morton – in no trouble at all – was all set to celebrate a double-century.
But needing only a 27th boundary to reach his milestone, Morton drilled a delivery from leg spinner Dan Cox into the grateful hands of Ryan Scott – much to the relief of the Lymington fielders, who had gained an appetite by chasing the ball all over the Wilton Road outfield for over two hours.
For the record, it was the 36th century of Morton’s career (25th in league games) - but a 192 was a little short of his highest score of 232 playing for Ealing in a Middlesex Premier League match against Teddington in 2016.
Morton’s other disappointment (if you can be disappointed after scoring 196 ?) was that South Wilts didn’t get near to beating Lymington, despite scoring 317-5.
The New Forest visitors made a comfortable 263-5 in reply, the draw costing South Wilts top spot in the Premier Division, albeit by only one point behind St Cross Symondians, who won by 91 runs at Totton & Eling.
Morton totally dominated the 196-run opening stand with Jack Steadman (66) and had made 122 when the young left-hander was trapped leg before (at the end of the 39th over) by Cox, who finished with 2-44 off ten overs.
By the time Peter Rowe (24) had departed, Morton was 165 not out. Ben Draper and a hobbling James Hayward fell cheaply to teenage spinner Jude Tollerfield, who did well with figures of 3-47.
Soon after, South Wilts declared at 317-5 after 59.5 overs, leaving Lymington 61 overs to bat – a position from which the Premier champions were always guaranteed a ‘winning draw.’
​Lymington, to their credit, gave the lofty run chase a real crack and were ahead of the required five runs an over asking rate for some time.

Given a sound 65-run launch, Lymington thrived while Ryan Scott (70) and Conor Moors were at the crease and particularly when Moors, the talented Bournemouth hockey player, began to clear the Bemerton boundary with some regularity.
He blasted six maximums and eight fours in a blistering 87 and had Lymington marginally on top when he was bowled by Aaryan Sen (2-73) in the 39th over.
Unfortunately for the sun drenched crowd, Lymington were unable to sustain the assault and, with handy contributions from Josh Royan (34) and Ali Wheble (27 not out) closed a creditable 263-5.