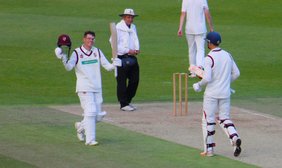 Tom Morton has his sights firmly fixed on becoming the first ECB Southern Premier Division cricketer to score 1,000 runs in a season.
His 96, scored during an 187-run opening partnership with Jack Stearman in the win over Hook & Newnham Basics, took his SPL run aggregate for the summer to 817.
So, he needs another 183 from South Wilts' remaining six matches to reach the 1,000 run milestone.
That equates to South Wilts' final 'time pennant' all-day game against Bournemouth at Bemerton on Saturday, 1100, and the five 'white ball' 50-over matches against Bashley (Rydal), Hampshire Academy, Totton & Eling, Havant and Burridge.
Morton, arguably in the form of his life, can hardly seem go put a foot wrong at the moment as he plunders one opposition bowling attack after another.
Since making that unbeaten 150 for Wiltshire against Shropshire at Corsham on July 2, Morton has rattled off 72 (St Cross Symondians), 196 against Lymington and now 96 at Hook.
Ironically, he's missed out on a double clebration by being unable to score a boundary when he had reached 196 against Lymington, and then 96 at Hook.
But Morton will put personal gains to one side in the knowledge that, as a result of overnight leaders St Cross Symondians losing by 12 runs to Havant, South Wilts are now back on top of the Premier League.
The 113-run victory over Hook was built around the 187-run start by Morton and Jack Stearman, whose 102 was his third century in the past eight knocks. He possesses a basic skill many SPL batsmen might care to follow, ie getting his head down and working for his runs. It's paid off with 671 runs, so far ...
Ben Draper (24), fresh from scoring two half-centuries for Hampshire 2nd XI against Glamorgan in midweek, and Jack Mynott (22) chipped in as South Wilts headed towards 293-9 declared.
Fighting for points to stave off potential relegation, Hook fought hard to stave off defeat and South Wilts took until the 55th over before securing a maximum 25-point victory.
Opener Harry Warner (33) battled hard as did debutant Rupes Armstrong (36) much later, but Josh Croom (3-39) and Aaryan Sen (3-34) eventually prevailed and Hook were dismissed for a creditable 180.