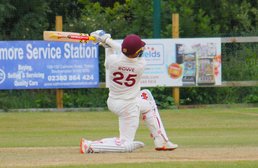 The Rowe and Croom show

Peter Rowe lit up South Wilts’ 46-run win over Totton & Eling with a glittering 162 not out – admitting afterwards it had taken him a while to re-adjust to playing ECB Southern Premier League ‘time’ cricket again.
“It was the first time I’d batted in an all-day game in three years, since 2019, so it took some getting used to,” he confessed.
“I felt in really good nick but, above all, was pleased I didn’t give my wicket away like in the 50-over games against Hook & Newnham Basics and Bournemouth, where I got myself out after getting 50. Us Aussies just don’t do that !”
Rowe is thoroughly enjoying his cricket at South Wilts, having picked up a championship winning medal with the Bemerton club last summer.
He’s now in his seventh season in UK cricket, having played in the backwaters of the Huntingdonshire and Leicestershire & Rutland Leagues after leaving his native Western Australia in 2015, where he dipped his toes in First Grade cricket with the WACA grade club Melville alongside the banks of the Swan River.
Rowe filled his boots playing in the East Midlands and, bad news for local bowlers, looks likely to do repeat the dose in the Premier League.
He’s a delightful batsman to watch, fluent, full of elegant, wristy shots off his legs and, typically Australian, devasting against anything pitched short.
His unbeaten 162 came out of a South Wilts total of 264 and contained 15 fours and five sixes.
The 25-year old saw nine different batting partners depart during his 200-ball stay at the Southern Gardens crease. His was the longest individual innings recorded in the Southern Premier League, beating the previous ‘highest’ by Paul Draper (then of Calmore Sports) when making 98 at Burridge back in 2000.
“It was difficult getting any partnerships going as we were losing wickets so regularly and it wasn’t until Josh Croom (14) came in at 152-7 that things stabilized,” Rowe continued.
They added what proved an innings defining 60 for the eighth wicket, Totton keeping themselves well and truly in the contest with Joe Bracey (4-55) and young Leo Taylor (2-43) continually making inroads.
Even so, South Wilts were hardly win favourites at 220-9 when Rowe and last man Matt Burton added another 44 – the Australian bringing up his 150 in the process and Burton scoring a rare boundary, much to the delight of his team-mates.
Bothwell Chapungu came out with all guns blazing at the top of the Totton & Eling order and while he remained at the crease, the 2021 Division 1 champions were always a threat.
He struck a six and nine fours in 72 – his third 50-plus score so far – but lost Fletcha Middleton (20), Conor Griffiths (14) and Harry Stephens (21), all of whom made starts.
Totton’s prospects of a win waned when Croom, back for a second spell, bowled the Zimbabwean. A promising 164-3 became 218 all out – the last seven wickets falling for 54 runs, six of them to teenage left-armer who was too hot to handle for the lower order, the last three going down in five balls. A score of 235 would have secured a ‘winning;’ draw.
Five of his victims were caught – three behind by Tom Morton – Croom finishing with 6-45 to take his SPL tally to 28 for the summer. It was his second six-wicket haul.
The win kept South Wilts four points ahead of the Hampshire Academy at the top of the table ahead of Saturday’s potentially significant Vice President’s Day match with arch rivals Havant at Bemerton, 11am.