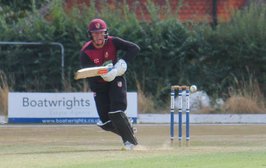 Tom Morton set a new ECB Southern Premier League top flight record on his way to narrowly missing out on a fifth league century of the season.
Morton was dismissed for 95 - caught by Chris Stone off the spin bowling of 14-year old Matty Hayward - as the Bemerton club posted 253-3 in their penultimate league match.
Havant fell just one short, bowled out for 252. Requiring four runs off the final over, Richard Hindley took a single off the first delivery before Arthur Godsal sent down a wide.
Amid increasing tension at Havant Park, rookie Hayward dug out successive yorker length balls failed to score off the third and fourth balls before he was bowled off the fifth.
Morton has now compiled 1,088 runs from 17 league innings. That’s 18 runs more than New Zealand batter Neal Parlane, whose 1,074 runs for BAT in 2003 shattered a record that had stood for over 30 years.
Hampshire legend Robin Smith, with 1,015 runs for Trojans in the old Southern League, had held the top flight record since 1982.
In addition to his four league tons, Morton has also been dismissed twice in the 90s - 96 (against Hook & Newnham Basics) and now 95 (v Havant). He also ended on 94 not out against Lymington.
While Morton was setting a new record, opening partner Jack Stearman was on his way to his third SPL century of the season. The left-hander struck nine fours and two sixes in his 115, sharing a 211-run first wicket stand with Morton.
In reply, a 254 victory target must have seemed a very long way off when Matt Burton (4-40) dismissed opener Harry Gadd and Simon Loat for ducks.
George Metzger - with an 82-ball 80 featuring 12 boundaries - led a fightback but Havant still had much work to do when he was fifth out with the score on 157.
Skipper Ben Walker (33) and Hindley (42 not out) provided middle order runs, but at 218-8 the visitors were still in a very sticky situation.
Richard Jerry (16) helped Hindley add 29 for the ninth wicket, though, and Havant were only seven runs short of their target when Jerry was caught by Morton off the bowling of Godsal.