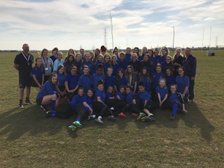 Since October last year, as part of the RFUs All Schools initiative to introduce rugby to all secondary schools, George has been working with local schools Spalding Academy and Thomas Cowley to introduce and develop Rugby skills to students, by running lunchtime and after-school clubs for all ages, boys and girls.

George said “After working with Spalding Academy we recognised that there were a lot of girls interested in the game and they needed an outlet. So we planned the development day, which was led by myself with Jess Lester from Spalding Academy, Peter Jullien and David Betteridge from the RFU helping. We had over 40 girls come along with a lot more interested in participating in future.”

During the session at the New Ground the girls, ranging from Year 7 through to Year 10, completed several skill sessions and game related play, culminating in full contact games at the end.

George was very impressed with the effort the girls put in during the session “I thought that the girls did brilliantly and really worked hard.” With so much interest from the girls at Spalding Academy and potentially other schools in the area, George went on to say “There seems to be a good base for setting up a girls section at the club and I am sure that over the coming years both the school and club will benefit positively from the experience”

There are plans to hold another development after Easter with Spalding Academy along with Thomas Cowley attending as well and he would like to work with Jess and potentially develop this with other schools in the area. During the summer, (following the end of the Contact season) the Club is also hoping to run Touch games for girls and ladies across all age groups alongside their regular Touch sessions – all the information will be on the Club website and the schools will be notified.

If you are interested in coming along to girls/ladies Touch sessions at Spalding RFC please contact George at george_rfc@yahoo.co.uk

Following on from the success of the boy’s playing sessions held at the New Ground, before Christmas, George has also been asked to run a development day for the year 7, 8 & 9 boys at Spalding Academy.