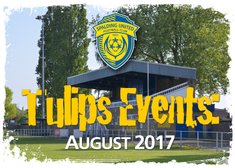 Organised by Tulips' Committee Members, Michelle Smith and Lewis Thorogood, full details of the event (currently still being finalised) will be released via the club's website and social media outlets (Twitter and Facebook) within the coming days/weeks.

Suffice to say here and now that this first Tulips 5-A-Side Tournament will take place after the U21's inaugural home Pre-Season Friendly vs Coventry United (which kicks-off at 12.00 midday on Saturday 5th August), with the 5-A-Side Tournament set to run from 3.00pm-8.00pm.

As well as the fully-licensed Tulips Social Club within the ground, a BBQ and assorted entertainments to keep the young ones amused throughout the afternoon are also set to be part of the plans with between 8-10 teams being sought to take part.

More information as/when we have it: keep the date free!...