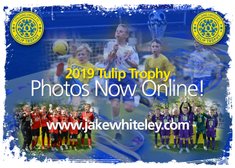 2019 Tulip Trophy Proves To Be A Huge Success

The unseasonably chill conditions failed to dim the spirits/smiles of all in attendance at the club's second Elite Youth Football Tournament!...

The 2019 Tulip Trophy, comprising 82 teams, playing 265 games across 6 pitches within six age categories (U7s thru U12s) over two action-packed, fun-focused bank holiday weekend days, was a hugely positive way for Spalding United FC to round off an otherwise challenging season on & off the pitch.

Tulip Trophy Tournament Organiser (and first-team Asst Manager, as if he didn't have enough on his plate!) Lewis Thorogood was delighted with all aspects of the two-day event, this year sponsored generously by Peterborough-based worldwide latex glove supplier, Aurelia (part of the SupermaxUK brand) and plans are already afoot to host Tulip Trophy III over the same bank holiday weekend in May 2020!

With luminaries such as Norwich City, Nottingham Forest, Peterborough United, Mansfield Town and Chesterfield in attendance with slightly lesser-known but no less-worthy organisations such as 780 Coaching, Saffron Dynamo, Grimsby Borough, Elite United, Peterborough Northern Star, IPT Academy and local village side Wyberton FC (to name just a few), the biggest accolade of all probably went to U12 Finnish side FDS Suomi Jalkapallokoulu, our first international visitors, who thrilled audiences with their overall team play & skill and who won a tight U12 Final 2-0 over Norwich City CFS.

Throughout the weekend all our participating teams played their games in the right spirit and were a credit to their clubs/organisations: credit to them and thank you to everyone who sponsored, supported, participated, volunteered, officiated, stewarded, catered - without you all we'd have no tournament and, I think it's fair to say, with the Spalding United Tulip Trophy we've now got one of the best & most enjoyable Elite Youth Football Tornaments in the whole of the country!

Finalists galleries and some Action highlight photos from Day 1 & Day 2 of the 2019 Tulip Trophy have already begun to hit the website of Tulip Trophy Official Photographer www.jakewhiteley.com - the complete set of Day 1 & Day 2 Action galleries should be uploaded by week ending Friday 17th May!

Well done & thank you everyone; we look forward to welcoming you all again in 2020!...