Join Us For The 2019 Tulip Trophy This Weekend 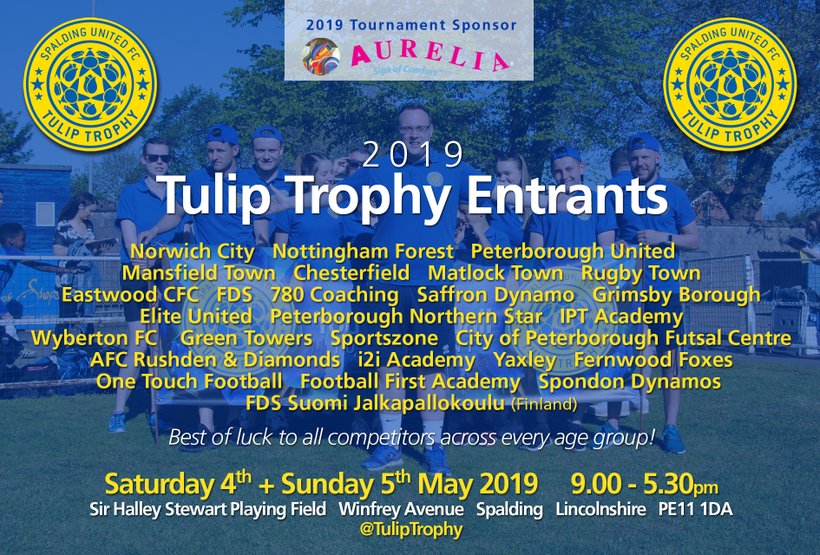 Tulip Trophy tournament organiser Lewis Thorogood will be keeping a beady eye on the weather over the next 48 hours, praying for copious breaks in the forecast showers that threaten to dampen things a little this coming weekend between 9.00am-5.30pm.

Fingers crossed, the showers stay away and we'll be assured as good a turnout as possible for the region's flagship Youth Football Tournament - suffice to say, the risk of heat-stroke/sunburn that bedevilled spectators, players, volunteers and staff last May is not on the cards this year!

82 teams, playing 265 games across 6 pitches within six age categories is what we have to offer the viewing public this weekend, with luminaries such as Norwich City, Nottingham Forest, Peterborough United, Mansfield Town and Chesterfield locking horns with slightly lesser-known but no less-worthy clubs such as 780 Coaching, Saffron Dynamo, Grimsby Borough, Elite United, Peterborough Northern Star, IPT Academy and local Wyberton FC, to name just a few!

Last year's inaugural event was a resounding success and a superb advert for the football club, the town of Spalding and it's fair to say, the whole of South Lincolnshire, with teams coming from far and wide - this year we've extended our catchment net to embrace FDS Suomi Jalkapallokoulu, journeying all the way from Finland to be with us: fantastic effort by them and indeed all our competitors!

All paying entrants will be given a FREE, full-colour Souvenir Programme and the Tulips Snack Shack will be serving a wide variety of hot & cold food, hot drinks and cold beverages throughout the two days - with all this in mind, we hope as many of you as possible will pop along to the Sir Halley Stewart Playing Field for some, if not all, of the day where you'll be thoroughly entertained by the exciting crop of youngsters plying their wares.

The most up-to-date list of competing clubs/teams in this year's 2019 Tulip Trophy is as follows:-

Very best of luck to all competitors this coming weekend: do your best, respect your teammates, opponents and our Match Officials and be sure you play the game in the right spirit, win, draw or lose.

 2019 Tulip Trophy Proves To Be A Huge Success The unseasonably chill conditions failed to dim the spirits/smiles of all in attendance at the club's second Elite Youth Football Tournament!...

Read The Latest Tulips Match Report (Sat 27.04.19)  Tulips fans can read about the first-team's performances in 2018/19 via Ray Tucker's Match Reports on the website...