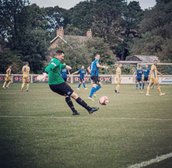 Spalding United sunk to a heartbreaking defeat to Cleethorpes Town.

A late, late goal saw the Tulips fall to a 2-1 defeat to the Lincs FA Senior Trophy at the Linden Field on Saturday.

After trailing to a 16th minute penalty in the quarter-final tie, the Tulips battled superbly before levelling the scores through Lewis Brownhill on 80 minutes. But hopes of taking the game beyond 90 minutes were dashed by a deciding ‘Clee’ goal with just two minutes remaining.

With seven members of his squad unavailable for selection, manager Matt Easton had to dig deep into his resources, but he had nothing but praise for his troops who, under some pressure for long periods, battled every inch of the way, never making it easy for the home team.

There were some exceptional performances, non- moreso than mid-fielder Kegan Everington, defenders Taron Hare and Josh Spencer and goalkeeper Michael Duggan who made some exceptional saves to thwart the home team attack.

Against a side playing their eighth pre-season game it was the Tulips (playing only their third friendly), who featured first in attack with George Zuerner, featuring with Jenk Acar, testing home ‘keeper Theo Richardson.

Duggan was brought into action shortly afterwards to deny Alex Flett, but the ‘keeper had no chance of keeping out Scott Vernon’s penalty in the 16th minute. Three minutes later Jamie Jackson ducked and weaved in the home area but was forced wide and shot into the side netting from an acute angle.

Five minutes into the second period the Tulips suffered a few anxious moments when the ball was delivered low into their area, but three goalline blocks in succession prevented the home side extending their advantage.

Just past the hour mark the home goal was under siege with Jackson turning defenders before delivering the ball which eluded the advancing Acar by inches.

The scores were levelled on 80 minutes. Taron Hare won possession just inside his own half and pumped the ball beyond the defence to find Lewis Brownhill racing clear to fire the ball superbly past the static Richardson.

The stunned home side came storming back only to be denied by the brilliance of Duggan. But skipper Alex Flett proved to be their hero with a crucial deciding goal two minutes from time.