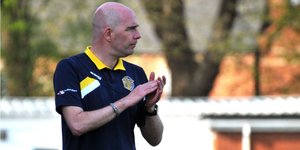 He captained the home team, largely formed from the Under-23 squad with a few first-teamers, with goals on 12, 23 and 43 minutes on route to an 8-1 win at the Sir Halley Stewart Playing Field.

Ted Holliday completed the first-half scoring on 39 minutes. It was a game dominated throughout by the Tulips, although the firemen battled all the way and scored a fine consolation goal 11 minutes into the second period after conceding a fifth knocked by one of two trialists fielded by the Tulips.