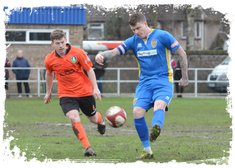 A thoroughly miserable afternoon was rounded off with the Tulips losing new skipper & leading goalscorer Gary King to a red card...

In consistent drizzling rain and a very chilly atmosphere, the Sir Halley Stewart Playing Field was not a very pleasant place to be on Saturday afternoon.

And unfortunately the 78 diehard spectators (the lowest attendance of the season) witnessed possibly the worst game of football at the venue for a very time.

The standard of football between two teams battling for vital NPL Evo-Stik South points in the lower half of the table was, frankly, abysmal and ill-disciplined with five players, James Tricks and Paul Walker (Tulips) and Rhys Thompson, Alex Lingard and Jackson McKeever (Kidsgrove) cautioned for minor infringements, and the Tulips' newly-appointed captain Gary King (pictured) sent off for delivering a punch, although not connected, towards a Kidsgrove player. It was later alleged that a member of the opposition had spit into King’s face, thus instigating the unseemly response from the Tulips' skipper who, as leading goalscorer, will prove to be a costly miss in the Tulips upcoming games at Gresley FC (Sat 3/2) and at home to Frickley Athletic (Tue 6/2) and Stocksbridge Park Steels (Sat 10/2).

The early stages of the game were highly competitive and entertaining with the Tulips generally holding the reins. Paul Walker, on his return to the club on dual-registration, following a brief sojourn to Boston United was last man involved in a four-player right side movement, but under pressure from marker Alex Lingard, he fired into the side netting.

Within minutes King’s free-kick from 25 yards out was pushed wide by ‘keeper David Parton, but the pattern of the game began to change after Lee Cropper had put the visitors into the lead against the run of play. His shot from just outside the area appeared to be going high of the target but the outstretched hand of goalkeeper Michael Duggan appeared to alter the flight direction and the ball dropped just under the crossbar and into the unguarded home net.

A big midfield battle then developed on the sticky playing surface with little involvement in either penalty-area, although the Tulips had two promising efforts as the interval approached. A good crossfield ball by Lee Beeson picked out the advancing Conor Marshall but his finish lacked power and another swift break saw James Tricks’ low cross just elude Cenk Acar.

The Kidsgrove lead was increased four minutes into the second-half with the unfortunate Walker turning the ball into his own net at full-stretch when attempting to clear Kyle Diskin’s cross-shot.

The unsavoury side to the game, something akin to a school playground rumble, came in the 75th minute when from apparently nothing there was a mass of bodies piling in on each other. The end result being a player from each side cautioned and King sent-off.

Down to ten men for the closing stages the Tulips were hit by a third Kidsgrove goal, a 30-yard strike by visiting skipper Anthony Malbon screamed into the net, a shot which would have had the Match-of-the Day’ pundits purring at it's sheer cheek and majesty.

The Tulips gained a scant consolation with a scrambled goal by James Tricks in the fourth minute of added time.