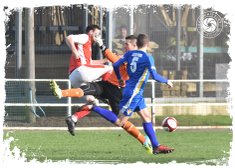 A valiant and battling 0-0 draw at Belper Town on the final day secured the Tulips place at Step Four next season: well done all!...

The Tulips will be playing Step Four football again in 2019/20 thanks to achieving a vital point from their final NPL Evo-Stik East Division game of the season in the heart of the Derbyshire Dales , at Belper Town, on Saturday.

Knowing that a single point would keep them out of the relegation positions the Tulips actually completed the campaign with a clear four points margin over Carlton Town and six ahead of basement side Gresley FC, both of who lost their final games: as a result, Gresley fall through the trapdoor to Step Five along with AFC Mansfield who will be demoted due to failing FA ground-grading

The Tulips finished level on points with local rivals Wisbech Town (who also suffered defeat – to champions Morpeth Town), but behind them by a narrow margin of two goals difference.

Saturday’s game against mid-table Belper Town was never going to be easy, even moreso when faced with the fierce winds of Storm Hannah blasting straight down the pitch. But the entertainment value was exceptional, exciting , and nail-biting at times.

Facing the elements in the first half the Tulips withstood the home team advances magnificently with the back four of Taron Hare, James Hugo, Rudy Misambo and Neal Spafford providing the vital cover for goalkeeper Michael Duggan, and the midfield quartet James Culingworth, Kegan Everington, Archie Moyses and Isaac Cooper making the link to the strike partnership of George Zuerner and Leon Mettam, highy efficiently.

The Tulips were first to show in attack. Isaac Cooper took a neat pass from skipper Mettam cleanly and turned his marker to curl a great shot inches wide of ‘keeper Sebastian Malkowski’s left side post after just six minutes.

Belper responded with Craig Nelthorpe testing Duggan with a well directed header following a long throw into the area. Midway through Jordan Deacey’s wind assisted shot from 30 yards out was carried just feet wide of the target.

Duggan again showed his ability to the full to punch the ball away amid the aerial threat of home attackers as the half time break approached, while at the other end a promising Tulips break just failed to make the final breakthrough.

With the strong wind at their backs in the second half the Tulips’ attacks were becoming more frequent. A James Cullingworth free kick was floated into the home area but narrowly missed making contact with both Zuerner and Everington. Belper did have the ball in the Tulips net on 73 minutes but Alex Peterson’s strike was ruled out for a foul on Duggan.

Two minutes later George Zuerner’s head connected with a Cullingworth free kick but the ball missed the target by inches.

At the final whistle a draw was a fair result between two hard working teams, the Tulips’ particularly pleased to have ended the season with a clean sheet and a highly valued point.