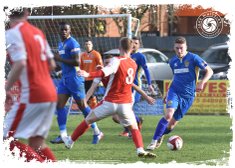 Another late goal in the 'Against' column was enough to see the Tulips come up empty-handed aginst visiting Stocksbridge Park Steels...

Two teams, both locked in an epic relegation battle, were engaged in a relatively dour contest at the Sir Halley Stewart Playing Field on Saturday afternoon.

The pressures weighing heavily on the shoulders of both the Tulips and their guests from Yorkshire, Stocksbridge Park Steels, were evident to most in attendance from the early stages of this NPL Evo-Stik East Division contest. It seemed that with the lack of quality play on offer - which both teams have previously shown they are capable of producing - the game might well eventually be decided by a single goal scored in the closing minutes: so it proved to be!

With just six minutes remaining, former Tulip Jordan Lemon (with 57 appearances for the host club behind him), provided the crucial cross from the right touchline for Steels' substitute James Morris to break the deadlock with a crisp finish inside Michael Duggan's near post from an acute angle.

Although the match lacked quality passing football – the ball was hoofed skywards far more than any self-respecting fan of football should be expected to endure – there was no shortage of action at either end of the pitch.

Two minutes later the visitors Danny Frost, involved in a goalmouth scramble, hoisted his close-range shot over the bar. Tulips front-man Bradley Wells won possession just inside the Steels area following a promising Tulips build-up, but saw his low projected shot scream across the goal-area without finding any blue-clad toe to complete the move.

And so it continued with both goalkeepers busy making important saves and blocks as the opening half ended in stalemate.

Eight minutes into the second period Everington’s inswinging corner kick clipped the Steels crossbar, courtesy of a Steel deflection and the ball was scrambled to safety, while the Yorkshire visitors thought they had bagged the decisive opening goal on 78 minutes with appeals that the ball had crossed the line before being hooked clear by defender Neal Spafford. Referee Jack Forder appeared to signal a goal but after consulting one of his assistants awarded a free kick to the home side.

After finally conceding the late goal the Tulips staged an all-out battle to get back on level terms, but the nearest they came as the game edged into added time, were a couple of headers from Misambo which ultimately were devoid of the necessary penetration.

The shoulders of the home players understandably slumped at the final whistle, knowledge that their fight to stay in the division had just got a notch harder being all too apparent, but stand-in boss Lewis Thorogood (manager Matt Easton is still recovering at home following illness and a hospital stay last week) has to galvanise the troops in earnest ahead of the visit of high-flying Ossett United next Saturday 30th March (KO: 3.00pm).