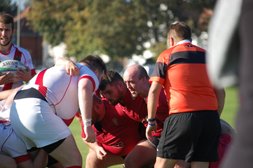 The game was in the balance for 50 minutes but a surge of late tries put the League to the sword as Spartans record 3rd consecutive bonus point win to sit atop Gloucester Prem!

Spartans had plenty of motivation heading into their local derby against Gordon League. Firstly the League were one of only 2 teams to do "the double" over Sparts last season and the hosts also boasted George Boughton and Callum Bankes in their ranks, summer signings from the visitors, making for an interesting angle.

In addition Spartans had made a perfect start to the new season and were keen to keep their momentum.

The first half ebbed and flowed, the hosts having then general upper hand in play which was undermined by too many lapses in defense allowing the League opportunities to stay in the game.

Spartans scored 3 first half tries through Ben Beattie, Josh Allaway and Brad Dunn, who put in an eye catching 50 minute cameo returning from injury. He infact replaced Nick Rhodes, who suffered a reoccurence of a groin injury that will see him miss the next few weeks.

The hosts gradually gained control of the game with their scrum holding up well to the heavier league pack and as the game drew on their fast attacking play opened up plenty of opportunities throughout the 2nd half to record 5 more tries as Ash Lewis enjoyed a well deserved try, whilst Beattie and Allaway both added another, with Dunn dotting down twice more for a hat trick.

Man of the Match for Spartans was Marty Cummins, who stepped in at Scrum Half for the injured Tom Broady and did a fantastic job of keeping the fast pace in Spartans attack play.

Still plenty to work on for the Red Ants however 3 bonus point wins to start the season isn't bad at all.