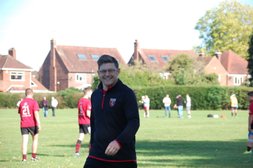 Four from Four, and a total of 26 tries scored. A successful start to the season!

Another successful day for Spartans as they recorded their 4th bonus point win of the season away at local rivals Hucclecote. This despite a host of changes once again due to injury and unavailability which shows a tremendous depth in the 1st XV squad.

Spartans were quickly into their stride and scored 3 tries threw wing Josh Allaway, Full Back Ben Beattie and number 8 Luke Foran, all three players proving a constant threat throughout the game.

Hucclecote gradually grew into the game and pressure late in the 1st half resulted in their 1st try to bring the half time score to 19-10 and we seemed set for a close match.

The Red Ants however upped the ante in the 2nd half and were rewarded with a further 4 tries through speedster Allaway, Fridge Freezer Ashley Lewis, Corporal Jamie Chamberlain and Head Coach Ryan Barnett, out of retirement for the 27th and final (maybe) time, whose 80 yard run and spectacular swan dive was THE highlight of the day!!