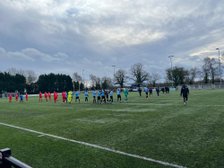 Khalsa paid the price for failing to put away their chances.

Referee: Samuel LeeKhalsa had three great chances in the first half which all fell to in-form striker Miracle Okafor. Miracle had an early effort but after skipping round the keeper saw his shot cleared off the line by Amarvir Sandhu. Okafor saw another strike turned round the post by Paul Hathaway in the Coleshill goal and then Okafor latched on to a Sandhu backpass but sent his shot wide. Alex Tomlinson was denied by Sam Arnold for the hosts in the closing stages of the first half.

The decisive moment of the match came just before the hour mark when Tomkinon’s free kick found Liam Molesworth who crossed for Kai Tonge to head the winning goal.