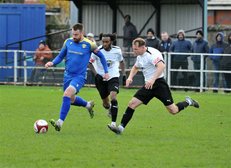 Khalsa tasting first away defeat of the season

Spalding's Dylan Edge scored after just four minutes, sweeping the ball home to round off good build up play by Steffan Broccoli and Aaron Hart.Khalsa had a lot of procession in the first half but wasted chances with both Matt Fulloway and James McGrady wasting chances.

Against the run of play Spalding doubled the lead in the 69th minute as Lewis Hillard won the ball to feed James Clifton whose far post ball was looped over Sporting keeper Sam Arnold by Sam Cartwright.

Khalsa had some late chances with the best one falling to Matt Fulloway again. Sean Williams also went close with a free kick. A tight game with Spalding taking there chances and defending well to make sure Khalsa did not score.