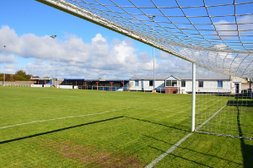 History
Half a century ago, Squires Gate British Legion, as they then were, accepted an offer from Blackpool Council to take a lease on a new ground which had been created on the site of a former tip on the southern edge of the town. They spent the next few decades trying to bring the pitch up to a decent standard, and creating the facilities which were necessary for league football.

Starting out in 1948, Gate had proved a capable side from the outset, winning the Blackpool and District Amateur League's Rawling Shield in their first season. Blackpool FC's Wembley triumph in 1953, the conquest of Everest, and the Coronation were not the only memorable events in that year, as Squires Gate became the new name of the Club, which went on to win the League title in 1955-56, retaining it in 1959-60, and also lifting the Blackwell Cup in 1958-59 and 1959-60.

Moving up into the Fylde District League for a single season in 1960-61, Gate won the Fylde Cup, and were losing finalists in the Bannister Cup.

The newly-reformed West Lancashire League presented Squires Gate with a sterner challenge, and they spent from 1961 to 1980 in Division Two before being promoted as Champions, and they went on to win the coveted Richardson Cup in 1986-87.

After much soul-searching, the Club applied for membership of the North West Counties league for the 1991-92 season, and after a hurried ground development programme, duly took their place in Division Two, becoming the third NWCFL club within a 300 yard radius, alongside Blackpool Wren Rovers and Blackpool Mechanics. Honours were much harder to come by, but Gate did manage to win the Fair Play Award in 1993-94, and were runners-up in the Division Two Trophy in 1997-98.

The 2001-02 season saw Gate lift the Division Two Trophy, and then the following season they finally achieved promotion to Division One, remaining in the top flight since then. 2005-06 was something of a highlight, as Gate finished in their highest League position, and reached the quarter final of the FA Vase. Under the guidance of Manager Andy Clarkson, the Club reached 6th position in the Premier Division in 2007-08, their best so far.

In recent years, Gate's real achievements have been in developing the Club itself. Some of the former players who moved to School Road in 1960 are still around, working in various capacities, most notably Brian Addison, who has progressed from player to Linesman, to manager, to Secretary, to Chairman, and eventually to the most important job of all: groundsman. Once the pitch had been relaid some ten years ago, Brian has gradually turned the pitch into one of the best in the League, and with the opening of the new changing rooms a couple of years later (named after one of the Club's great stalwarts, Wilf Carr,) the ground has become unrecognisable since those early days. The complete refurbishment of the Clubhouse in 2006, with air-conditioning added the following year, and now the upgrading of the floodlights, means that Squires Gate can be rightly proud of what they have created since those far-off days playing on the tip.