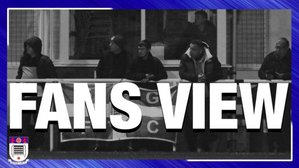 Some new fan content from the club, as we ask supporters for their favourite matches, and goals...

Please note, these are not the views of Squires Gate FC

Why Squires Gate?
"This is a long story. Blackpool FC are my first love and always will be. I am Blackpool born and bred, a Sandgrown’un. I was a season ticket holder for over 40 years. A group of around 20 of us stood, then sat together for years. The Oystons ruined this."

"We all (bar one) boycotted. It was easier for me as I had always watched non- league since my teens. As I lived in the North of the town I watched Fleetwood whenever I couldn’t get to Pool games. This mainly due to work issues. I saw their rise through the leagues from crowds of less than 200 to the 3K plus they get now. I even saw then play at Wembley in the Vase final. But when they reached the football league this had to stop (my own self determined rule, that you could not support TWO league clubs)."

"In 1999 I moved to the South of the town. I would watch Fylde, or Kirkham as they were then, Wrens, Gate, or Mechs. More often I would go to the Shovels, have a few beers, and decide where to go. This changed when my Nephew; Danny Penswick commenced playing for Gate, then along with my brother- in- law, Brian, took on the management/coach positions. Although not too successful it was a period I enjoyed as a fan."

"It was whilst being more involved(fan wise), rather than the odd game here and there, that I noticed how friendly the club were. In a day and age where football fans are just seen as commodities, especially in the League of Greed AKA the Premier League. Non-league football feels very refreshing in its honesty and down to earthness. When Blackpool reached the Prem, whilst it was great on one hand, I really hated the plastic fans, and the patronising way the 'smaller' clubs are treated."

"It was a tough call not to return to Bloomfield Road on a permanent basis following the boycott, but it just didn’t seem right to leave Gate behind. Possibly this was also due to the fact that we original 20 plus fans have never got back together. Some never will. I lost my close friend to cancer whilst the boycott was on. He died the day after the return Home game against Southend. He NEVER broke the boycott, and never saw his beloved Pool play again. Some sacrifice, and a major reason why I have NO time for the people who did. So I have a real bitterness, and sadness, when I go to Bloomfield Road. This may change in the future, but I’m an unforgiving #*&%$@%"

"So on a brighter note Gate are stuck with me for the foreseeable future. Behind the scenes the club is really moving forward. The impetus of the young ‘uns really helps. Even if I have no idea what’s being talked about on Twitter, WhatsApp etc etc at times. Just need to get things going on the pitch. Hopefully get a few more fans in as well. Can never understand why they don’t come down. I cannot watch neutral games of football (ie United v City etc), no passion for me. Would rather support someone local. Even if that has been Mechs at times."

TOP 3 GAMES
Thanks for the invite. Tough this, as I have a goldfish memory for these things. As such I am unable to go back as far as I would like. However, here goes for games (no particular order)...

3. FOUR-A-PIECE
Nothing beats a good cup tie so our 4-4 away draw with Droylsden in August 2018 is there.

1. WE ARE STAYING UP!
Has to be the 2-0 victory at Ashton Athletic when we needed to win to stay up. Think this was when Nobby scored the "phantom" goal.

Also worth a mention...
Other games like the last minute Ryan Charnley winner away at Widnes in 2017-2018 also sticks in the memory. As does the 3-2 Win at home to Runcorn Linnets a season or 2 back. Brett "Stinger" Dawson scoring the winner. God there fans moaned after that match...

TOP 3 GOALS
3. GARY PETT (vs Droylsden 2018)
Always admired Gary Pett, he was such a strong, combative, but skilful player, and great with a dead ball. So it’s his Free kick at Droylsden in the FA cup in August 2018 for me.

2. RIC SEEAR (vs Northwich Vics 2019)
A half volley in our 2-1 defeat at Northwich Vics on 16/04/19. This was just inside the Vics half, and the ball came to him from a Dean Ing flick on. He then, with great awareness, hit it first time, chipping over the keeper, who was off his line.

1. DEAN ING
Difficult as there are numerous goals I would pick. Nobbys “ goal” from the halfway line that never was is up there. Rico (Andrew Richards) scored a peach of a goal from distance, about 4 or 5 seasons ago, but I cannot remember the game. Stinger was a real loose cannon, and scored a few important goals. However, for me it must be Dean Ing. Which goal you ask? My reply the NEXT ONE. A player who will run through brick walls for the club, never gives up, not too shabby in the skills department, every team needs players like this.

Want to get involved? Get in touch
If you would like to feature in "fans view" then send an email to squiresgatefc@hotmail.com with your 3 favourite Gate goals, and matches along with why you support Squires Gate FC! We can't wait to welcome you back, to watch NWCFL Premier Division football!