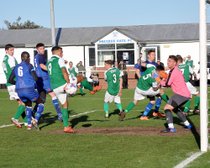 Some changes to Gate's diaries coming up...

Gate will have no midweek game this weekend after Northwich Victoria’s draw against Lancaster City in the FA Cup. Vics’ replay takes place on Wednesday night and we wish our league counterparts well.

Our game against 1874 Northwich has also been postponed again due to there progression in the FA Cup. The club are working hard with other teams in our league to try and get a new fixture for this date, which we’ll advice on as soon as possible.