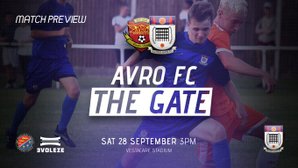 Gate are back on the road again, read our preview of the game here...

The start of a new era at the club as New Manager Luke Evans takes us to Avro.

Pre-Match Build Up
New Gate manager Luke Evans takes Gate to Oldham to face Avro in his first league game at the helm.

The visitors took the lead after 13 minutes through Paul Dawson for his first of the game. Dawson was again on target in quick succession with two goals to complete a 32 minute hatrick. Lancaster extended their lead before half time through Sam Bailey, Gate got one back through Riccardo Egidi.

The second half saw another two goals for City through defender Jack Armer and Niall Cowperthwaite.

The Away Team
Avro have started the season with three wins and five losses from eight games as they look to impress in their first season at this level.

They come into this game on the back of a 2-1 defeat against Ashton Athletic on Saturday afternoon. Dale Korie-Butler opened the scoring before Avro levelled through Louis Potts. Ashton struck again though two minutes later with Butler getting his second of the game.

Last Time We Met
Gate and Avro last met last season in the FA Vase where Avro came away with a 2-1 win.

Kane Wallwork opened the scoring after just 12 minutes when he beat Ben Fletcher in goal down the wing.

The hosts then extended their lead in the 26th minute when big midfielder Mike Stockdale headed past Fletcher unmarked from a corner.

Avro were then reduced to ten men when Louis Potts was sent of having been judged to have thrown his head towards Joey Mullen. Gate couldn’t make the man advantage count though did pull a goal back through Riccardo Egidi.

Head to Head
The two sides have met just the once which came last season in the FA Vase. Avro of course recorded a win against Gate.

If you can't make the game on Saturday be sure to follow us on Twitter and Facebook for match coverage as it happens. We'll also have a full match report and pictures on the website on Sunday as well as in Monday’s Blackpool Gazette.