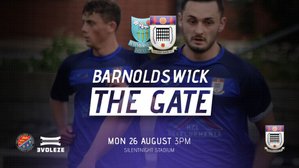 Gate are back on the road again, read our preview of the game here...

Back on the road again as we head to Barndoldswick looking for another three points.

Pre-Match Build Up
Gate come into this game in high spirits after winning our first game of the season on Tuesday night.

Gate went behind when Dom Craig opened the scoring after 11 minutes for the homeside. Andy Clarkson's side head didn't drop though and they matched the hosts for the rest of the first half.

After what was no doubt an inspirational team talk at half time from the Manager, Gate came out all guns blazing in the second half. Dean Ing grabbed a goal back for Gate in the 61st minute with a fine individual effort. The as Gate continued, up popped Luke Noble to score his first goal for the club to win the game for Gate in a nervy last ten minutes.

The Away Team
Barnoldswick have started the season with two wins a draw and a loss as manager Matt Barnes looks to mount a promotion push.

Barlick's wins have come against Ashton Athletic and Avro after a draw and two losses at the start of the season. Former Gate men Ric Seear and Joe Noblet will come up against there former side with both in good form in-front of goal. Seear scoring two in two whilst Noblet opened his account with a goal on the opening game of the season.

The visitors opened the scoring after 12 minutes from the penalty spot, Zack Dale converting for his first of the day.

Gate equalised when Billy Akrigg, who was making his debut, scored a fine individual goal in the 28th minute. Andy Clarkson's side then ran riot with four goals in the second half.

Riccardo Egidi scored his first of the day in the 47th minute but the visitors replied with another goal for Dale from the spot. Not to be deterred Egidi scored again and again to bag a second half hatrick. The scoring was rounded off in the 92nd minute when James Boyd got in on the act from the penalty spot.

Head to Head
The two sides have met 18 times since 2010. Gate have some work to do to catch up to Barlick when it comes to winning games with Monday's home side winning 10 games, whilst Gate have only won three. Five games have ended in draws.

If you can't make the game on Monday be sure to follow us on Twitter and Facebook for match coverage as it happens. We'll also have a full match report and pictures on the website on Tuesday as well as in Tuesday’s Blackpool Gazette.