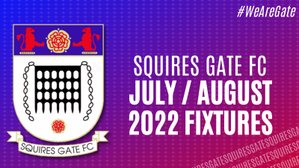 We can now confirm our League fixtures for July and August

The end of July sees the start of the 2022/23 NWCFL Premier Division Season. We kick it off with a home match against AFC Liverpool, over whom we did the double over in the last campaign.

August meanwhile sees the opening rounds of the FA Cup and FA Vase take place which will be drawn in the coming weeks.

The full competitive fixture list for July & August is as follows:

We look forward to welcoming back our loyal supporters for the upcoming season! Details for each match will be announced in due course.