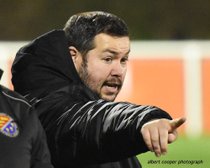 "Like we said, 0-0 is not good enough, but we take the point and move on."
Luke Evans, Manager.

Evans was a disappointed man come full time after watching his side come away with a draw against the ten men of Whitchurch.

"We obviously feel like it's two points dropped against ten men. Once they go down to ten men at half time we're obviously hoping to win the game. We've gone and thrown everything at it but ultimately couldn't get a goal."

The visitors were reduced to ten men on the stroke of half time following Alex Hughes' second yellow card after he was sin binned.

"I felt that lads gave everything out there which is pleasing. One thing I felt from last Friday night was that the lads didn't give enough, I think everybody gave every ounce of effort they have. But like we said, 0-0 is not good enough, but we take the point and move on."

Gate came closest in the last ten minutes of the game when full back Jake Higham rattled a strike off the crossbar, something that Evans believes shows the lack of his sides luck on the day.

"Like I said we've thrown absolutely everything at it but sometimes they're just not going to go in. We could have still been playing in a weeks time and not scored. I thought the back five were all great today, final third though we've got to take our chances, then we'd win that comfortably."