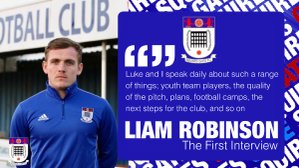 After joining the club last week, we caught up with our Head of Youth Development...

Liam Robinson
Liam was appointed Head of Youth Development last week, and is settling into his new club. In his first interview for the club, he explains what his plans are for the youth development.

First of all, what attracted you to joining the club? How did it come about? What are the long term plans?
As I mentioned briefly before, I spoke with Luke and hearing about the direction he wants to go in with the club it would have been silly to turn it down. There is a real passion and drive from Luke’s side and speaking to everyone else it seems that everyone wants the best for the club. For me personally, it is to ensure that Josh has enough support to grow a group of U18’s who can look forward to stepping into men’s football as soon as they’re ready. Long term? I would personally designate that to hopeful success with all teams - especially the first team with an aim to compete at the top end of the table, pushing for a promotion and building on that within the next few seasons.

You've been at the club for over a week now, how have you settled in? What is your relationship like with Luke?
It seems like it is so much longer. So much is going on ready for the return of both the first team and youth team so it has been non-stop which is great!
Luke and I speak daily over such a range of things, youth team players, the quality of the pitch, plans, football camps, the next steps for the club, ideas and so on. He’s easy to drop a message to or call whenever so yes we get on well.

Gate have the ambition to grow on and off the pitch. In recent times, Gate have been looking to push on. How do you feel that you can build on that?
I was here playing years ago when Dave McCann was here and then coaching years back with a junior team so to see the progression in the club is great. From everything: changing rooms to the players within the club. Hopefully I can use some of my experiences to support firstly wherever needed within the club and secondly to ensure that the youth team get support where needed - bounce ideas and thoughts with Josh and Luke and hopefully help the club grow.

You've got a very creditable CV, having worked at Blackpool and Manchester City among other clubs. How did you find the experience of working for these clubs? Is there any particular highlight of your career?
I was fortunate to coach from when I was still in high school for my younger brothers’ team. That helped me get a hunger for coaching early on. Each step I took from then developed my understanding and learning. I had a couple of great local coaches who helped me at Liverpool in Carl Pomfret and Ryan Vaughan. Blackpool was completely different but I would say the most important year of my coaching so far – it had everything and seeing other coaches deliver sessions up to the players on the edge of the youth team was really good to see. Finally, working for City was over in the UAE, where we had a squad and recreational programme. It was brilliant, day to day coaching with a brilliant set of lads and thankfully I still keep in touch with a lot of them.

Is there any particular highlight of your career?
I couldn’t pin point one if I’m honest, each new role I get which is within football pleases me and obviously each role gives me a new challenge and that is what I enjoy the most.

Who's the most famous person in your contacts?
So, my best mate from working at City is good mates with Josh Brownhill at Burnley, he came over for a week and on a night out Ben used my phone to ring Josh, so I saved it just in case!

What are your long term career goals? Where do you aspire to be in 5 years time?
My goal personally is to climb as high up the football period that I can. I am waiting to hear back from the FA to see if I am on the A License, if so, that is the first goal. Then we will hopefully be moving forward with Gate. Beyond that who knows!

If you would be interested in booking your child onto our Easter Football Training Camp, where Liam will be a coach - please contact us at squiresgatefc@hotmail.com for more details.