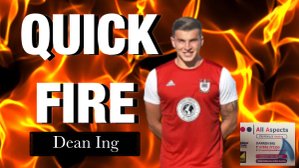 Next up in our quick fire series, Dean Ing...

Favourite band?
I don’t really have a favourite band as I listen to all types of music but growing up I used to listen to a lot of Oasis and still do now occasionally.

Best gig you have been to?
Well, I’ve only been to 1 gig in my life time and of course it was to see Michael Buble. Legend.

Are you into podcasts or do you only listen to music?
I listen to Peter Crouches podcasts which are class whilst working or whilst walking and listen to a wide range of music whilst driving or running.

Your go to alcoholic drink on a night out?
Whilst at university, I used to drink absolutely everything but these days I sway more towards a vodka lime and lemonade and I don’t mind a raspberry gin & lemonade either!

Any fears?
Drowning is my biggest fear and I don’t tend to venture far out in the ocean on holiday for this reason although I’d say I’m a fairly strong swimmer.

If you were going to relive one football game without knowing the score, which would you pick?
Blackpool v Cardiff at Wembley in the Championship play-off final. That day was special as a Blackpool fan and to witness it live was on another level.

What would be the first thing you'd do if you won the lottery?
I’m currently looking to buy my first home so I’d purchase that and then make sure my family were set up before splashing the cash elsewhere.

What car do you drive?
I drive a Volkswagen Golf.

Favourite summer destination?
I’ve had many good holidays in Majorca, both with the family and the boys so I’d definitely say here. Although I am looking to venture to more exotic places when I can.

If you were to be in a movie as the main character, which would you choose?
Dwayne Johnson/ Jason Statham. I like a lot of their movies, especially since most of them are action films which I’m a big fan of.

Two pet peeves?
My two biggest pet peeves are waiting around on people who are late. I’m usually early or on time and spend a lot of time waiting for people. Secondly, the scratching noise on a pair of jeans goes through me so much so it would have to be that.

If you could go back in time, what year would you travel to?
1966. I’d love to witness the atmosphere and buzz around the country when England won the World Cup. That would be special.

Do you believe in any conspiracy theories (no judgement)?
I’m not sure if I do. I certainly have questions about things but I tend to keep away from conspiracy and work with facts.

You're stuck on a desert island with one player from Gate. Who would you pick?
I’d have to pick Sam or Ryan. I feel as though them two are intelligent and would have good ideas on how to survive, not to mention both of them could chew my ear off so I’d never get bored from a lack of conversation.