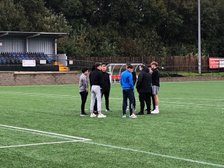 TEAM NEWS: New gaffer keeps it similar in his first game in charge.

Luke Evans has kept a smilier look to his starting eleven.

Luke Evans has kept a smilier look to his starting eleven for this afternoons North West Counties Premier Division game against Avro at The Vestacare Stadium.

The starting 11 see’s just one change as Adam Pennington comes into the side for Ben Fletcher who is unavailabe.

On the bench there’s new faces for Gate as Sohaib Ahmed and William Mccaragher could make there debuts after signing during the week. Ryan Dodd and George Fox are Gate’s other options from the bench as Luke Evans looks to get of to a good start.