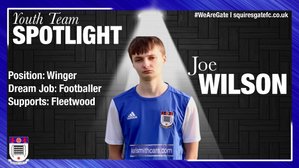 Getting to know our youth team players, with this quick-fire interview...

First ever football match?
First match was watching Fleetwood when they were in the Conference, with Jamie Vardy I believe around 2012, not sure who it was against.

Favourite football kit you’ve owned?
My favourite kit was probably one of the old Inter Milan kits my grandparents got on holiday I remember having Diego Milito on the back.

If you could relive one football match, not knowing the score, which game would it be?
I think I'd go with when Manchester City beat Leicester when Kompany scored that worldie, the title race was so close and the game was heading for a draw until that.

If you were to create a 5 a side of players from the team you support, who would you pick? Past and present?
Alex Cairns, Lewie Coyle, Lewis Gibson, Jordan Rossiter and David Ball

Favourite band/Musician?
Not really sure if it's a musician but right now I'd go with Izzpot from OFB

What 3 songs are the first on your pre-match playlist? [/b]
MW3 - I Stand Alone, Dutchavelli- Only If You Knew, Y.CB- Ready For War

Do you listen to any podcasts?
Yeah I always listen to the Ricky Gervais show with Karl Pilkington and Steve Merchant. I'm also into onthejudy, which interviews footballers.

What is your favourite holiday destination?
I don’t really like going away, I sort of just like staying put.

If you were to sing a song on karaoke, what would it be?
Definitely wouldn’t be singing, that’s not my thing.

Which footballer are you most similar to?
I'd probably say Mark Albrighton can play out wide and in wing back - not the quickest but he's got good passing and crossing.

Which sport would you play if you didn’t play football?
Not really into many other probably tennis I get bored watching it live but I like playing it.

Dream stadium to play in?
Probably Fleetwood's Highbury, I've been on the sidelines watching the team so many times and it would be class to play there having seen my team always play there.

Best mate at Gate?
Wouldn't really say I have a best mate there, but I think the ones I get on the most with is Dom, Tyler, Josh, and Louis.

If you could have a chat with any footballer, past or present. Who would it be?
Ravel Morrison I think his story within his career is really interesting and seems like a chill guy.