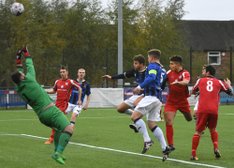 Manager Andy Clarkson made several changes to his side after Tuesday night defeat to Irlam. Defenders Dave Rossall and Saul Thorpe came into the back four with Joey Mullen preceded in midfield.

The homeside took the lead 12 minutes into the first half. With Gate down to ten men due to Riccardo Egidi changing his shorts, the homeside struck taking advantage. Winger Kane Wallwork firing last Ben Fletcher to open the scoring.

Newly appointed player/assistant manager Joe Booth came close to levelling the game just minutes later when he and Brett Dawson linked up. Booth’s shot though was straight at the keeper.

Avro came close again in a fast opening 20 minutes. They struck the post from a freekick before firing over from the rebound.

Avro doubled their lead in frustatring fashion from a Gate point of view. From the corner the biggest man on the pitch was left unmarked to head in past Fletcher to make it 2-0.

Gate were gifted a lifeline in the game when an Avro midfielder was sent off! The referee judging that Louis Potts had put his head towards Joey Mullen.

Gate had a shuffle round in personal at half time with Dean Ing coming on for Andy Richards with Joey Mullen moving to right back. It was Mullen who came close on 57 minutes when an Avro clearance came out to him but he fired over with a first time effort.

A minute later and Gate would get on the scoresheet. Striker Riccardo Egidi opening his account for the club when he headed in Adam Sumner’s cross.

Gate had plenty of possession in the game but just didn’t test the home keeper enough. A lovely 8 pass move created a chance for Ryan Riley, but his shot was straight at the keeper.

Gate had a late chance for a freekick on the edge of the box, but Adam Sumner’s strike was straight at the keeper who saved well, Gate couldn’t convert the corner.

Late into the last five minutes of normal time, the homeside saw another player dismissed. This time the goal scorer Mike Stockdale was sent off for a second yellow.

Gate though couldn’t take advantage of the two dismissals in the game and exited the FA Vase.

Gate are back in action on Tuesday night hosting Winsford United at The Brian Addison Stadium.