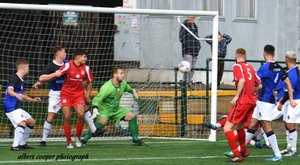 Squires Gate started a new era at the club with defeat at Avro on Saturday afternoon, but there was positive to takes for new boss Luke Evans.

Evans, who joined the club from AFC Darwen this week, took charge of his first Squires Gate game at newly promoted Avro. He was forced into one change coming into the game with Adam Pennington coming in for Ben Fletcher who was unavailable. He also added new signings Sohaib Ahmed and William Mccaragher to the squad.

Gate started the game on the front foot and could have opened the scoring after just 30 seconds! He tested the home keeper but could only force a corner which Avro cleared.

Ricardo Egidi did well to find Ryan Charnley our wide moments later, the midfielder sent in a testing cross but the ball just fell ahead of James Boyd.

Boyd had the chance to test the keeper after six minutes when a ball through the middle found his run. He was one on one with the keeper but the shot stopper was out quick to deny Boyd with his feet.

The opening goal in the game came for Gate after 16 minutes. Josh Pollard doing well down the right hand side to win a corner for Gate. From the corner the goal came, the ball finding Dean Ing in the six yard box to fire in.

Avro came close to equalising via a freekick on the half hour mark. Gate were counting there blessings though when they watch the ball cannon back off the post.

Gate had calls for a penalty waved away minutes later. Josh Pollard sending in a freekick looking for Dean Ing at the back post, the midfielder was dragged down but the referee was unsighted and waved away the protests.

The homeside levelled the game down the other end a minute later. A nothing ball forward finding striker Potts who headed over Pennington who was in nomans land after coming for the cross.

The homeside started the second half the better of the two sides and nearly took the lead early on. Gate giving the ball away in midfield allowed Avro to break forward but Jacobs fired well over.

They took the lead just after ten minutes into the second half through striker Potts who headed in after the ball was headed back across Goal.

Whilst Gate saw a lot of the ball in the second half, they just couldn’t test Avro.

The homeside scored a third goal late into the last couple of minutes following another mistake from Gate at the back. The ball was spilled in the box where sub Abdul Abdallah reacted quickest to push the ball in.

The goal scoring didn’t end there though as Gate got another goal back deep into added time. Riccardo Egidi tripped in the box as he looked to take aim on goal. The striker dusted himself down to slot the ball past the keeper to make a nervy last few minutes.