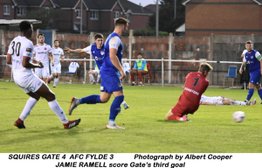 Following Saturday’s FA Cup exit at the hands of Ashton United, Gate returned to The Brian Addison Stadium to host Jim Bentley’s AFC Fylde in front of a sell-out crowd.

After a cagey opening, Gate took the lead on 11 minutes with the first chance of the game. A perfect free-kick delivery from Ryan Riley was met by Dean Ing who headed powerfully past Chris Neal in the Fylde goal.Gate were able to double their lead on 23 minutes when the hosts won a penalty following a blatant foul from a Fylde defender.

James Boyd stepped up and rolled confidently into the back of the Fylde net to increase Gate’s advantage. Kust six minutes later however, the visitors pulled one back.

A strong run from Ben Tollitt led to the former Blackpool winger firing in a powerful shot into the top corner, giving Jordan Gidley no chance at his near post. Gate almost regained their two-goal advantage as James Boyd fired a long-range free-kick onto the crossbar with the goalkeeper beaten. Then three minutes later, striker Jamie Ramwell, who started in place of Elliot Pond, pounced on a defensive error to slot clinically past the Fylde goalkeeper from inside the area to put Luke Evans’ men 3-1 up.

The Coasters were able to pull one back before the break, as their number 9 headed home a free-kick unmarked from close range. The same player then missed a glorious chance for an equaliser, heading wide from just outside the six-yard box.

Following an all-action first half, chances dried up for both sides in the opening stages of the second period. Gate fired a couple of shots off target from the edge of the area while the visitors wasted a few corners, most notably on 63 minutes when their Number 9 missed another good chance, heading over from close range.

Fylde’s number 9 was wasteful yet again just two minutes later. The striker, on trial at The Coasters, found himself unmarked in the Gate area, but again failed to find the target. Former Blackpool midfielder Danny Philliskirk then had a powerful strike tipped over by Jordan Gidley.

Despite Fylde having most of the possession in the second half, the hosts stayed strong at the back, and even managed to increase their advantage again through their Number 18 on 77 minutes. A goal-bound free-kick by Ryan Riley was brilliantly saved by substitute Max Johnstone, but the ball fell to the Number 18 who tapped into the open goal. Five minutes later, Dean Ing then went close to sealing the victory for Gate, firing against the side netting from a tight angle after being played through by Ryan Dodd.

Fylde were able to pull one back late on, as a powerful strike deflected past goalkeeper Matthew Garrett, who replaced Jordan Gidley in one of many changes made throughout the game from Luke Evans. Despite this late goal, the hosts hung on to secure a superb win.

A superb win for Gate against National League North opposition, once again showing their ability to more than compete with teams from a much higher level.