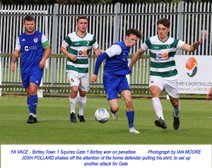 Gate travelled to the home of Birtley Town for the first qualifying round of the FA Vase following their brilliant midweek victory over AFC Fylde. New signing Andy Howarth was unavailable for selection while Luke Taylor started at left-back with regular starter Jake Higham not involved.

Though chances were few and far between for both sides in the opening stages of the game, the tone for what was to be a fiery match was set early on as Gate skipper Staunton-Turner was hacked down inside two minutes.

With similar challenges and a clear competitive edge coming from both sides throughout the half, it was only a matter of time until the referee had to take action – which he did with Gate striker Dean Ing on 23 minutes. After a foul from a Birtley defender, tempers flared which led to Ing using abusive language against the linesman, resulting in a straight red card for Ing and Gate going down to 10 men with most of the game still to play.

Birtley looked to take advantage of their extra man, and went close to an opener on a couple of occasions. Drane dragged a tame shot wide of the target from the edge of the area while Lewi Teasdale headed wide with Jordan Gidley off his line.

Teasdale made up for his missed chance though just four minutes lager, when on 42 minutes, the striker put Birtley into the lead. Teasdale pealed away at the back post and tapped into an open net after a great ball across the face of goal.

The hosts almost doubled their lead in added time as Barwick poked past Jordan Gidley, only to be denied by a goal line clearance from Josh Westwood, keeping the score at 1-0 going into the break.

Gate adapted to having 10 men, moving Ryan Riley and James Boyd more central to provide support for Elliot Pond, who was now leading the line on his own.

Boyd & Riley combined well in an early counter attack for Gate, only for Riley’s eventual cross to go out for a goal kick. Riley then had a free-kick saved by the Birtley goalkeeper, who managed to keep hold of the ball at the second time of asking

Birtley came agonisingly close to adding a second goal on the hour mark as the unmarked Chad Collins missed a golden opportunity from close range after finding space in the Gate area.

The hosts payed for this missed chance on 75 minutes as the hardworking Elliot Pond earned Gate a penalty after being pulled down in the area. James Boyd stepped up and buried the spot kick confidently, bringing Luke Evans’ 10 men level with 15 minutes to go.

Both sides looked to attack at any opportunity in an attempt to win the game but both defences stood strong and the game ended 1-1 after 90 minutes, meaning the match would have to be decided by a penalty shootout.

Birtley confidently slotted home their first two penalties while Elliot Pond and Jamie Ramwell both failed to convert theirs, giving the hosts a 2-0 penalty lead. Birtley scored their next penalty meaning that James Boyd had to score to keep Gate in the game. Just as he did on 75 minutes, Boyd comfortably beat the goalkeeper to keep the contest alive. However, Ryan Drane dispatched the next spot kick for Birtley, sending the hosts into the next round of the FA Vase.

Full Time: Birtley Town 1 – 1 Squires Gate (Birtley win 4-1 on penalties)
A cruel defeat to take for Gate who narrowly exit the FA Vase on penalties after a spirited display in which they played the majority of the match with a man down.