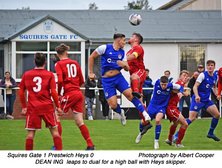 Gate end an impressive pre-season with a solid victory over Prestwich Heys.

Squires Gate returned to the Brian Addison Stadium for their final friendly of what has been a long but ultimately successful pre-season. Andy Howarth made his debut for Luke Evans’ side with the likes of Ryan Dodd, Jamie Ramwell and Alex Kaye all making the starting line up. Reported by James Ashton.

The visitors had all the early running, with a few shots fired narrowly off target in the opening stages. Heys’ Numbers 8, 9 and 7 all going close within the first 20 minutes.

Ryan Riley had Gate’s first sniff of the game on 23 minutes, volleying over from the edge of the box after being picked out by Jake Higham following a strong counter attack. Midfielder Josh Pollard was then denied by a superb save from the Heys goalkeeper from close ranger after a clever cutback from James Boyd.

Ryan Dodd was next to go close for Gate, hooking a tricky opportunity over the bar on the stretch. James Boyd was then off target with a shot from distance after a corner was only half-cleared by the visitors.

A corner from the visitors right at the end of the half almost caused Gate ‘keeper Jordan Gidley some problems as it looked to be heading towards goal, but the corner clipped off the crossbar and went behind for a goal kick.

Gate got off to the perfect start in the second half, taking the lead within 4 minutes of the restart. A dangerous corner from Ryan Riley was deflected past the hands off the goalkeeper and centre-half Josh Westwood was on hand at the back post to tap into the empty net.

Ryan Riley then had a strong effort from the edge of the area well held by the Heys ‘keeper while Andy Howarth and half-time substitute Dec Baldwin were both off target with shots from outside the box.

The visitors were looking for a route back into the game and earned a free kick in a dangerous position from the edge of the area, only for their number 3 to fire straight at Jordan Gidley. Heys’ number 17 then missed a golden opportunity to draw level on 71 minutes. The forward was played through on goal with a clever pass but blazed his effort over the bar with only the goalkeeper to beat.

Gate looked to respond to this scare, and almost doubled their lead straight away. A powerful free-kick from James Boyd on 73 minutes struck the bar while Josh Westwood was unable to double his tally five minuets later, heading over a corner from a tight angle.

Heys came close to a late equaliser on two occasions. Firstly, on 87 minutes, their number 9 found space in the Gate area and fired a shot from a narrow angle just wide of the target. Then deep into stoppage time, Gate ‘keeper Gidley produced an excellent double save to deny two Heys players a last gasp equaliser.

A solid win for Gate against a well organised Prestwich Heys side, seeing out an impressive pre-season for Luke Evans’ men with the new league season just around the corner. The blues will be travelling to Congleton Town next Saturday in their league opener.