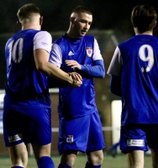 Gate end 2020 on a high with victory over Prestwich Heys in a seven-goal thriller.

Initially organised as a friendly to prepare for the next run of league games, Gate’s match against Prestwich Heys turned out to be the last match for some time, with the NWCFL season being suspended following the news Lancashire would be placed into Tier 4.

Manager Luke Evans used the friendly to give minutes to players who haven’t had much football recently, with the likes of Matty Garrett, Rob Hanslip, Ryan Dodd and Oli Orr all starting the game.

And what a start it was, with three goals inside the first 9 minutes putting Gate in complete control.

The first came through Josh Pollard. The visitors failed to clear from a Gate attack, and the ball fell to Pollard on the edge of the area and drilled a shot through a sea of Prestwich shirts and into the back of the net.

The lead was doubled just five minutes later through Dean Ing. The striker powered through the Prestwich defence and had his initial effort saved onto the post, but managed to tap in the rebound.

The third was grabbed two minutes later. Ing again caused havoc in the Prestwich defence and did brilliantly to find the space for a shot. His effort smacked the crossbar but Ryan Dodd was on hand to tap in the rebound to put Gate 3-0 up with just nine minutes played.

Gate came close to a fourth goal on a couple of occasions. Firstly a corner from Pollard was flicked just wide of the far post, and then a close range effort from Dodd found the net but was ruled out for offside.

The lead was extended on 36 minutes through Ryan Riley, who was making just his second start since September. A dangerous ball was played into the box and Riley smashed the ball into the top corner from just inside the area.

Against the run of play, the visitors grabbed one back right on the stroke of half time. A ball was played into the Prestwich striker who’s touch took him into the area and he dispatched the finish confidently into the bottom corner.

The second half started a bit more quietly than the first, with both sides battling well in the middle of the park and sniffing out any opposition attack.

The first real action came on the hour mark as Gate had claims for a penalty waved away by the referee. Ing looked to break through on goal but was brought down with a strong challenge by a Prestwich defender but the referee judged that the ball was won.

The visitors managed to get another goal back on 66 minutes. The ball fell to a man on the edge of the area who’s shot somehow squirmed through everyone and past Eccles into the back of the net.

The visitors were beginning to add much more pressure, and grabbed a third goal on 77 minutes. A well worked move from the visitors resulted in the striker showing some good footwork to create space for the shot and he found the bottom corner with a powerful low strike.

Gate almost put the game to bed however on 85 minutes as Pollard did brilliantly to make his way into the area but his goal bound effort was blocked. The visitors then had an appeal for a penalty waved away right at the death, but Gate survived and hung on for the win.

Victory for Gate on their final match of 2020 after a clinical first half performance.