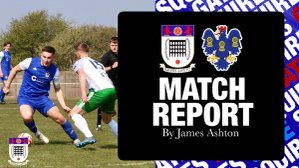 Gate fall to defeat against Northwich Victoria despite a strong performance from Luke Evans’ men.

Next Up
Gate will face Garstang at The Brian Addison Stadium on Friday night. This game will be behind closed doors, but we will continue to give full match coverage across all our social media platforms.

Gate returned to friendly action yesterday, hosting Northwich Victoria at the Brian Addison Stadium in a game used to get some vital minutes under their players belts.

The visitors got off to a flying start, netting twice inside a frantic opening 12 minutes. The first came on five minutes, as Trialist A broke in behind the Gate defence after a well weighted through ball and finished in off the far post. Their second came seven minutes later, as the same Trialist weaved his way in on goal and finished confidently past Danny Eccles.

Marcus Cusani and Kieran Feeney both went agonisingly close to grabbing a goal back for Gate, with the Vics goalkeeper making a great point blank save to deny the latter.

But Gate made their pressure pay and grabbed a deserved goal back through Jacob Ridings on 22 minutes. Feeney, who had started sharply, showed great pace and skill to beat his man on the left wing and found Ridings in the centre of the area who dispatched the finish.

Cusani & Sam Staunton-Turner both had ambitious efforts go off target for Gate, while Ryan Riley struck the crossbar with an excellent free kick on 40 minutes.

Gate started the second half strongly, dominating possession and pinning Vics back in their own half. Half time substitute Dean Ing had Gate’s first effort of the half, as a powerful drive from the edge of the area was tipped over by the goalkeeper - though the referee somehow gave a goal kick.

Gate continued their prsssure and almost got an equaliser as a well worked corner found its way to James Boyd on the edge of the area but his low stroke was parried away.

Then, on 78 minutes, Vics sealed their victory with a goal completely against the run of play. The visitors managed to find Trialist A who beat the offside trap and fired past Eccles to complete his hat trick with a well struck volley.

Gate didn’t give up though, and had a golden chance to grab a goal back on 87 minutes, but Ing could only head wide at the back post following a dangerous free kick delivery.

Defeat for Gate despite a dominant performance, but a good work out for Luke Evans’ men nonetheless.