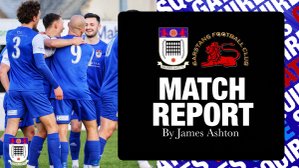 Gate welcomed Garstang FC to the Brian Addison Stadium last night as Luke Evans named a familiar line up with the likes of Dean Ing, Kieran Feeney & James Boyd all lining up for the home side. Young goalkeeper Matty Garrett was chosen in goal while youth players Harvey Faller & Dom Gil were named on the bench.

After a fairly uneventful opening to the match, the game sprung into life on 12 minutes. James Boyd drove through the Garstang midfield and dazzled the defence, breaking in behind and pulling the ball back for Kieran Feeney who made no mistake from close range. Gate’s lead was double just two minutes later, again Boyd at the heart of the move. The attacking midfielder sprayed a superb ball over the Garstang defence which found Dean Ing. Ing’s shot cannoned against the crossbar but Jacob Ridings was on hand to fire in the rebound, the wing-back’s second goal in three games.

Incredibly, Gate made it three on 20 minutes, with the electric Boyd getting his deserved goal. Ing held the ball up superbly and played Boyd in behind who unleashed an unstoppable strike into the top corner. A truly magnificent goal and start from Gate.

The visitors wouldn’t lie down though and almost pulled one back on 23 minutes. Garstang broke in behind but a combination of Matty Garrett and the far post somehow kept them at bay.

Garstang were able to pull a goal back on 26 minutes though. Gate defender, and former Garstang man, Rob Hanslip was penalised for a seemingly fair challenge inside the area and the spot kick was confidently dispatched.

Captain Josh Westwood almost regained Gate’s three-goal advantage on 42 minutes as he headed just over the bar, meeting a lovely free kick delivery from Ryan Riley. Dean Ing then had a powerful low drive from distance well parried away by the goalkeeper.

The second half also took a good 10 minutes or so to spring into life, with young midfielder Oli Orr being introduced into the game for goalscorer Ridings on 56 minutes.

Gate did manage to grab a fourth on 70 minutes through second half substitute Orr. Feeney showed brilliant close control and hold up play to slip Orr in behind the Garstang defence and the energetic midfielder took the ball into his path excellently and dispatched a powerful strike into the bottom corner. Another superb Gate goal.

Striker Dean Ing was desperate to get himself on the scoresheet and went close to grabbing a fifth for Gate, having a pinpoint effort somehow tipped just round the far post. The striker was denied again just three minutes later, as a powerful strike was saved with the legs of a valiant Garstang ‘keeper. Ing had another half chance on 86 minutes, seeing a smart effort kept out at the near post.

The visitors managed to grab a consolation goal with the last kick of the game, bundling over the line from an in-swinging corner.