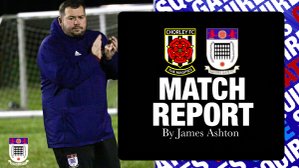 Gate fall to defeat despite a well contested battle against Chorley U21’s.

Following Friday’s comfortable victory over Garstang, Gate concluded their run of post-season fixtures with a tough trip to Chorley’s U21’s at Victory Park.

It was the worst possible start for Gate, as they fell behind inside the opening six minutes. The hosts pressed the Gate defence and won the ball back high up the field, and they took advantage - setting up a tap in at the back post to take the lead. Chorley had another chance three minutes later, but the eventual shot was well wide of the target.

Gate got themselves back in the game though and began to see a lot more possession. The first chance fell to the returning Jack Iley who fluffed his lines after a clever cutback from wing-back Jake Higham.

Luke Evans’ men were so close to an equaliser on 23 minutes. Kieran Feeney, who had just replaced Iley up front, smartly set up Jacob Ridings who’s rocket of a shot cannoned against the crossbar, denying the energetic wing-back a third goal in as many games.

Dean Ing and Feeney both had half chances before the break, but both strikers failed to find the targets with their efforts.

The second half started slowly, with both sides looking to get a grip on the game. Numerous changes throughout the second half for both teams would make it difficult for either side to gain any real momentum.

The first sight of goal of the half came through Feeney who was picked out by Ing with a clever ball over the top, however the striker couldn’t quite get the ball out of his feet and his eventual shot was comfortably held by the Chorley goalkeeper.

Gate also had a couple of 3-on-2 opportunities but both Chris Webster and James Boyd couldn’t quite get the final pass right to create a clear chance on goal.

Chorley had a decent chance to double their lead on 71 minutes, but the Trialist Gate goalkeeper made a fantastic reaction save to keep the ball out. The hosts did manage to grab a second goal on 78 minutes, bundling home at the near post after clever wing-play on the left hand side.

Kieran Feeney had another half chance for Gate on 83 minutes but could only head straight at the goalkeeper after a pinpoint cross from Ryan Riley.

Chorley, somewhat undeservedly, went 3-0 up with virtually the last kick of the game. A long ball ended up falling kindly to a Chorley man who fired in an unstoppable volley from outside the area giving the Gate ‘keeper no chance.

Defeat for Gate despite a fairly even game, with lots of positives for Luke Evans’ men to take from the match.