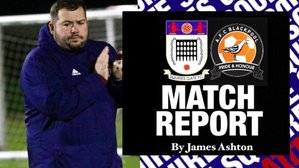 Following Saturday's 2-0 victory away to Irlam, Gate returned to The Brian Addison Stadium to host neighbours AFC Blackpool in the first round of the Macron Cup. Luke Evans made just one change, replacing Jonny Hothersall with Josh Okan.

Gate almost got off to the perfect start inside three minutes, with an excellent ball across goal by Ryan Riley just evading Wealth Da Silva in the middle of the six yard box.

AFC had the first shot of the game two minutes later, dragging an effort well wide from the edge of the box after Ollie Burgess sliced a clearance straight to Hughes.

The visitors made the most of their next chance though, taking the lead on eleven minutes. McLean and Morris linked up well down the left, with the latter picking out Josh Winder at the back post who fired past McLachlan.

AFC doubled their lead just five minutes later, with Billy McKenna scoring against his former club, finding space inside the Gate box and firing into the back of the net after good play by Winder.

Gate should've got a goal back on 20 minutes through Okan, with Da Silva picking him out unmarked at the back post but he fired against the crossbar.

Chris Webster fired an effort from distance well wide after good play by Okan, before a big save by McLachlan at the other end denied AFC a third goal before the break.

Joel Mills replaced Burgess for Gate at the break, before AFC fired the first chance of the half well off target after a drop ball in their favour.

McLachlan was called into action again on 53 minutes to parry away a strong effort from distance, before Da Silva sliced a good chance over the bar after Okan took advantage of some hesitant defending to head the striker in behind.

Da Silva missed an even better chance on 72 minutes. Mills did brilliantly to win the ball back high up the pitch and break in behind, squaring it for Da Silva who fired wide from close range.

Isaac Abankwah replaced Jack Iley on 75 minutes and was involved just five minutes later, setting up Josh Okan to get Gate back in the game. Abankwah drove down the right hand side and picked out Okan in the middle with an accurate low cross who poked past Woods in the AFC goal.

Just as Gate were applying pressure for the equaliser, AFC netted a third on 89 minutes through Ryan White. Thompson and Morris linked up well, with the latter playing White in behind who finished expertly past McLachlan.

Gate though got another goal back in injury time, with a deep free kick from Riley headed back across goal by Abankwah finding Okan at the back post who scored his second of the game. It wasn't enough though, with the referee blowing the full time whistle before Gate could find the all important equaliser.

A disappointing defeat for Squires Gate who will be looking to return to winning ways on Saturday when they host Padiham in the NWCFL Premier Division at The Brian Addison Stadium.