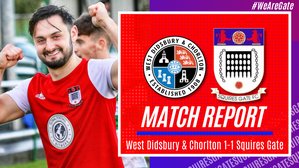 An excellent Ryan Riley free kick secures a solid point on the road for Gate.

Following three cup matches on the bounce, Gate returned to league action this afternoon with a trip to West Didsbury & Chorlton. Manager Luke Evans named an unchanged starting eleven from Tuesday’s draw at Southport, with James Boyd and Harrison Kay returning to the bench in place of Hesford and the injured Chambers.

It was the hosts who started on top, with a free kick flying narrowly over the bar after ten minutes and then a cross from the right bundled over the bar from close range.

Nathan Cliffe had Gate’s first notable effort on 19 minutes, stretching well to meet a pass by Theo Ball but his volley was well held. Cliffe went even closer five minutes later, with a fierce strike from distance parried out for a corner.

Gate remained on top, and it was Cliffe again with a shot after a clever lay off by Riley from a free kick, but again the West Didsbury keeper was equal to it.

Appeals for a Gate penalty after Westwood was seemingly bundled over in the box were waved away, before a clever effort from Ryan Moore flew just over the bar before the break.

It was a nightmare start to the second half for Squires Gate, as the hosts took the lead just two minutes into the half. A corner was played short to Miller, who cut inside and had his effort deflected into the bottom corner giving Pennington no chance.

Cliffe was again the man to go close for Gate as they searched for an equaliser, but be shot straight at the keeper after doing well to cut inside from the left.

James Boyd and Isaac Abankwah replaced Dan Gray and Harrison Webster on the hour mark, before Ryan Riley brought Gate level just four minutes later. Cliffe won a free kick in a dangerous area, with Riley curling a superb effort around the wall and into the bottom corner.

His goal didn’t prevent his substitution though, as he, Chris Webster and Ryan Moore all came off and were replaced by Mekkaoui-Abouzaid, Nathan Bartram and Harrison Kay.

Both sides scrapped in search of a winner, with a free kick in a good position for the hosts hit straight at the wall and a half chance for Theo Ball at the other end curled miles off target.

It was to no avail though, as both defences stood strong meaning Gate had to settle for a point on their return to league action.

A solid point on the road for Gate in what was a scrappy afternoon of football. Evans’ men are in action again on Wednesday night, with a trip to Northwich Vics.