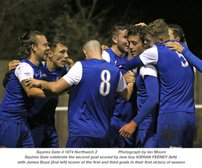 An emphatic performance from Gate sees Luke Evans’ side record their first 3 points of the season against a very strong 1874 Northwich side.

Gate returned to the Brian Addison stadium for just their second home league match of the season to face 1874 Northwich. Luke Evans made four changes from the side that lost to Charnock Richard last Tuesday. Luke Holden, Josh Pollard, Andy Haworth and Jamie Ramwell all missed out on the starting line up and were replaced by Josh Westwood, Dec Baldwin, Elliot Pond and Kieran Feeney, the latter making his debut for the club after signing on Saturday.

It was the perfect start for Gate as they earned a penalty inside five minutes after a blatant foul from an 1874 defender. James Boyd stepped up and, as usual, dispatched his spot kick cooly to put his side ahead.

Gate kept the pressure up and striker Dean Ing had two decent chances to double the lead. Firstly, an effort from distance that was comfortably held by the goalkeeper and then a strike from a tight angle that went wide of the post.

The pressure was made to count just two minutes later, as Kieran Feeney got a debut goal on 17 minutes. Feeney found space outside the box and unleashed an unstoppable strike into the bottom corner.

It was all Gate as two became three on 29 minutes, and what a goal it was. Higham, Feeney, Ing and Boyd linked up brilliantly on the left hand side and following a couple of well worked one-two’s, Ing slipped the ball to Boyd with a perfect through ball and Boyd finished clinically with a powerful strike past the goalkeeper.

The dominance continued and, on 33 minutes, the lead was extended to four. An excellent free kick found its way to the back post where the returning Josh Westwood dispatched a bullet header into the back of the net.

Against the run of play, the visitors managed to pull one back right on half time. A cross came in from the left hand side and found Mark Jones who’s effort found the top corner, giving the previously untested Jordan Gidley no chance.

With Gate in control at the break, the first 10 minutes of the second half went without a sight of goal for either side. This was until 1874’s number 9 hit just wide from the edge of the area after a strong run.

Westwood then had to make a superb goal line clearance to keep the score at 4-1, with Gidley claiming the rebound confidently. Gidley was called into action soon after, once again holding onto a strong effort from close range.

Gidley however was unable to do anything about the next effort he faced as, on 64 minutes, the visitors made their pressure pay through Jake Parker who gave the Gate ‘keeper no chance with a smart finish.

Gate went agonisingly close to getting a fifth just four minutes later as a seemingly goal bound header by Dean Ing hit the inside of the post. 1874 countered after this but were again thwarted by Gidley.

1874 kept pushing and tests Gidley once more, but again the goalkeeper made an excellent stop at his near post to keep out a powerful strike on 75 minutes.

This was to be the last real sight of goal for either side as Gate comfortably held out for an impressive win.

An empathic first half performance from Luke Evans’ men and a string of good stops from Jordan Gidley after the break sees Gate pick up their first 3 points of the season against strong opposition.